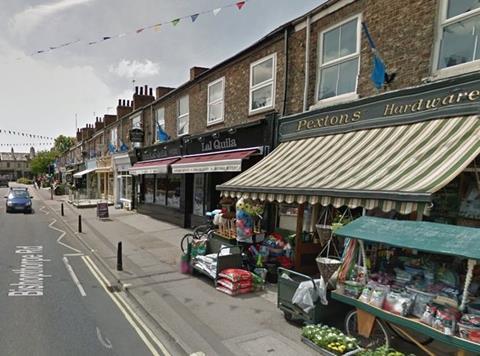 Bishopthorpe Road in York has been crowned Britain’s best high street in a competition run by the government’s Future High Streets Forum.

It was picked as the winner of winners in a competition that attracted 230 high street entries and nearly 200,000 votes from the public.

The competition named seven winners across a range of categories.

Each winner gets a share of an £80,000 prize as well as expert coaching from Google’s training taskforce for 100 shops, bars and restaurants.

The Great British High Street Awards 2015 was run by the DCLG, sponsored by Boots, Costa, the Post Office, Marks & Spencer, Tesco and the British Council of Shopping Centres.

“The excitement this competition has generated, with a huge level of interest from the public vote, is proof that the high streets are the life and soul of towns, villages and cities across the country,” said high streets minister Marcus Jones.

“Bishy Road fully deserves their title of Britain’s best high street and I congratulate them on their good work. We’ll be sharing Bishy’s top tips with other high streets across the country to make sure others learn from their success.”

Bishy Road Traders Association chairman Jonny Hayes said: “All high streets have to adapt to a changing environment - and we’ve been no different. But the traders on Bishy Road have really done their upmost to make the place a better place to live, shop and work.”

Other winners included Rotherham, which was named best town centre high street, four years after local councillors controversially painted murals to brighten up the facades of all the boarded-up shops.