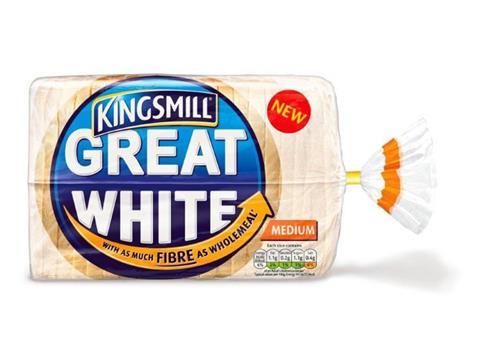 Great White will be backed with £6.7m of marketing

Allied Bakeries is looking to “save” the white bread category with the new Kingsmill Great White loaf, which contains as much fibre as wholemeal.

Overall sales of sliced white bread have been in long-term decline and have fallen 4.8% by volume - or 40 million loaves - in the past year alone [Kantar Worldpanel 52 w/e 2 February 2014].

Allied hopes to reverse the trend and create a sub-brand worth £100m within three years.

The bread was produced by adding fibre with a neutral taste at the start of the production process, said Allied brands director Darren Grivvell. “Development hasn’t been easy, but the result has been a product with no trade-off in terms of taste,” he claimed.

A key message behind the launch is making white bread ‘permissible’ to consumers who want to eat healthily. The brand is being backed with a £6.7m marketing push from April that will carry the message ‘Love White Bread Again’.

“In testing, consumers told us they felt Great White gave them permission to eat white bread again,” said category director Martin Garlick. “We are hoping we can act as a saviour for the white bread category.”

The loaves - which carry the same rsp as standard Kingsmill white bread - have rolled out to Tesco and will go into Sainsbury’s next Wednesday. Great White is expected to be in full distribution by April.

Garlick said Great White was not seen as a replacement for standard bread and that research had shown a “die-hard” 23% of UK consumers were committed to eating regular white bread.