Why and how we should change the Classic Coke recipe 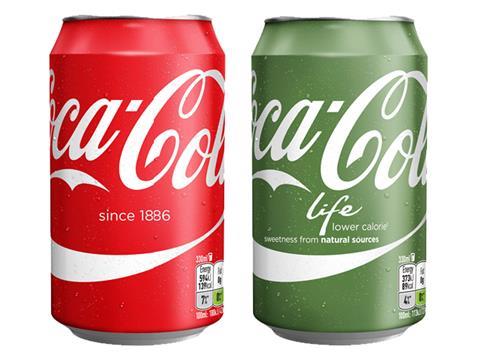 So farewell, then, Coke Life. What an ironic name that was. For you were always doomed. Who would want to buy a slightly less calorific version than the classic, but with a bitter metallic aftertaste, when there were two calorie-free alternatives for the diet conscious already?

Of course, with all that pressure to reformulate, it seemed like a good idea at the time. Offering a third low-cal choice, while getting the health monkeys off Coca-Cola’s back. Cos no-one in their right minds would ever change the formula of Coca-Cola itself, would they?

Well, actually, why not?

While the secret recipe is jealously guarded - ingredients being shipped to its syrup factories in the form of nine anonymous ‘merchandises’ - not only does the type of sweetener vary (sucrose in the UK, versus the even more controversial glucose-fructose in the US), even more surprisingly, so does the level of sweetness.

According to Action on Sugar, the variation between Coke in Thailand (32g) and Coke in Canada (39g) is a staggering 7g. The UK figure sits slap bang in the middle at 35g. So why wouldn’t Coca-Cola dial down the sweetness to 32g? It would still meet the brand’s flavour guidelines after all.

The answer, of course, is that British ‘tastes’ are pre-conditioned to the UK recipe. And a similar argument has been used to explain why the recipe for super-sweet cereals like Coco Pops (8g differential), Frosties (3.5g) and Crunchy Nut Cornflakes (3.2g) can vary so much in sweetness.

It’s a lousy argument not to do the right thing. British tastes can just as easily be reconditioned. After all, has anyone visiting Thailand or Canada ever realistically noticed the decrease or increase in sweetness?

And look at the alternative. A lot of soft drinks manufacturers are taking far more drastic measures in response to the sugar levy. A Red Coke with 10% less sugar seems like an easy and guilt-free way to still enjoy a Classic Coke - without the horrid after taste from stevia (or aspartame or ace-K).