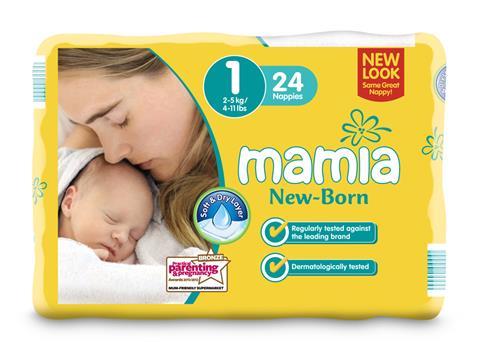 Lidl is trialling a new baby range in an apparent bid to emulate the success of Aldi’s Mamia.

The discounter will test new baby range Lidl’uns in four UK regions from September, having filed a trademark application for the name in June.

“If this range is successful we will look to roll it out to the UK,” a spokeswoman said.

Lidl declined to comment further, but its trademark application suggests the scope of the range will be similar to the Mamia brand, covering items including powdered milk, nappies and toiletries such as baby shampoo and lotion.

The trial will expand Lidl’s limited presence in the baby market, which involves selling nappies and baby wipes under the Toujours brand.

Rival discounter Aldi has achieved notable success with Mamia, launched in 2010. The range, which includes nappies, purées and toiletries, was named Own Label Range of the Year at the 2016 Grocer Gold Awards. It has also won babycare-specific accolades such as the Loved By Parent and Prima Baby Awards.

Mamia nappies have proved a particular ­success for Aldi, which has overtaken other retailers to become the number-one own label nappy brand [Kantar Worldpanel 12 w/e 16 August 2016].

Edward Garner, communications director at Kantar Worldpanel, said Lidl’s expansion into the baby category seemed “sensible”. “It’s a huge market and it catches people young,” he said. “The average shopper at Lidl and Aldi tends to be on the younger side so it certainly makes sense to get hold of shoppers at that age.”