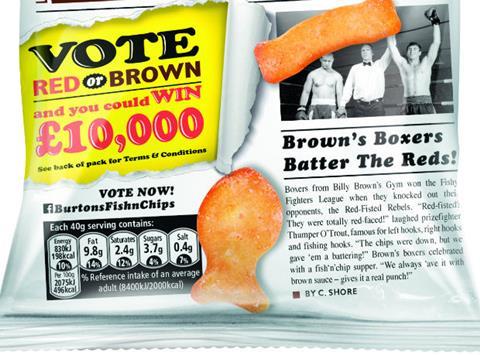 Burton’s Biscuit Company is pitting red against brown in a ‘Battle of the Sauces’ to promote its Fish ‘n’ Chips snack.

Launching the drive on 1 April, the brand – which returned to shelves in 2014 following a campaign by The Grocer after a 10-year absence – will ask shoppers to decide which of the new Red Sauce and Brown Sauce variants ought to become a permanent range fixture and which should be axed.

Consumers will have 12 weeks to vote for their favourite via Facebook, and will be entered into a prize draw with £10,000 up for grabs.

Their launch is to be supported by marketing activity including in-store sampling activity, PoS, a social media campaign and a partnership with Wireless Group. This will involve Fish ‘n’ Chips sponsoring key programming across four national radio stations: TalkSPORT, talkSPORT 2, talkRADIO and the soon-to-launch Virgin Radio.

“Red Sauce and Brown Sauce both performed extremely well in shopper research, with a high number of consumers indicating they’d be likely to buy both products,” said David Costello, head of category and shopper management at Burton’s.

“The winning combination of distinctive flavours backed by high-profile marketing support will accelerate demand for the brand and drive interest in these exciting new flavours.”