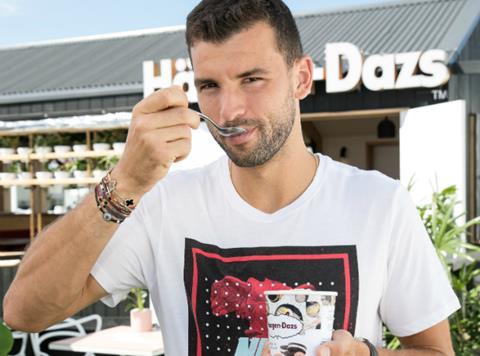 The ATP Finals winner, currently ranked third in the world, has signed a two-year deal with Häagen-Dazs. It will see Dimitrov star in multimedia campaigns beginning with this month’s Australian Open, where he will serve ice cream to children at Melbourne Park on AO Kids’ Day.

Dimitrov spoke to an audience “looking for permissible indulgence” said Richard Williams, marketing director (north Europe) at Häagen-Dazs owner General Mills. “He has a genuine passion for the brand, and we hope having him on board will engage a younger demographic who strive for excellence.”

Häagen-Dazs, a sponsor of the Wimbledon tennis tournament, last year saw a 23.7% rise in value sales, taking them to £55.4m [Nielsen 52 w/e 9 September 2017] on the back of a relaunch joined by a limited edition strawberries and cream variant.