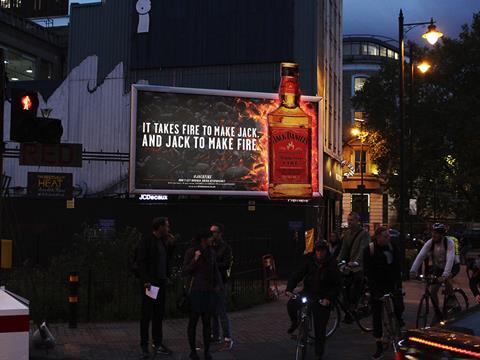 The push sees bottles of the drink appearing on billboards at two locations in London and one in Manchester this week and next. The installations use rope lighting behind the bottle to create a ‘fire’ effect.

To mark Bonfire Night tomorrow, Tennessee Fire bottles will be projected on to buildings within key drinking areas in London, Manchester and Glasgow.

“A brand such as Jack Daniel’s has amazing heritage with its use of out-of-home on the Underground, and we are incredibly excited to help launch Jack Daniel’s Tennessee Fire in such a non-traditional way,” said Rosie Straker, account director at media buying agency Kinetic, which planned the campaign. “It represents a great example of Jack Daniel’s utilising the engaging possibilities in the world of out-of-home.”

JD Tennessee Fire launched in June, exclusively in Tesco. Previous flavoured variant Tennessee Honey has been one of the biggest spirits launches of recent years; sales this year were up a third to £32.6m, pushing it into the top 20 spirits brands [Nielsen 52 w/e 10 October 2015].