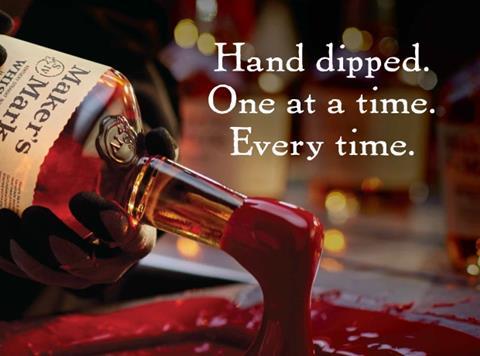 The campaign, billed as a “significant” investment by the Edrington-Beam Suntory brand, will see posters playing up the bourbon’s hand-crafted credentials roll out across sites in London from 2 July until the end of August.

The brand had previously faced challenges with supply thanks to production restraints in the US, which made mounting a large-scale campaign unrealistic, EBS marketing director Gareth Brown told The Grocer. “But we have recently expanded the distillery and the whisky is starting to get on stream so we need to drive the appropriate consumer awareness.”

Ads will run primarily at London Underground sites, supported by consumer and trade PR and specialist print advertising. “The creative is inspired by the fact that we are a craft whisky and we truly are handmade,” said Brown. “We hand rotate every barrel, hand dip every bottle, and that’s a very important message.”

It comes as UK sales of bourbon and American whisky are flying. In fact, Brits splashed out an extra £29.5m on American whisky over the last year - the equivalent of an additional 1.3m litres [Nielsen 52 w/e 24 March 2018].

“Its smoother, slightly sweeter, more mixable and approachable style is definitely helping it,” said Brown. “There’s also the craft element of bourbon and that it has an interesting story behind it.

“Bartenders and the on-trade have had a big influence - they’ve seen the US trend and brought it back to the UK. Bourbon is absolutely more versatile and lends itself to cocktails. Whisky has always been a big part of UK drinking but bourbon and American whisky is this generation’s tipple.”