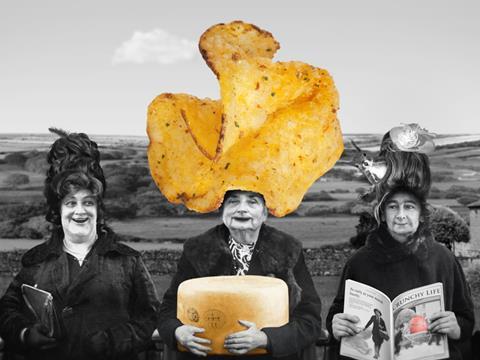 The ad will run from 11 September until late November

Tyrrells is to air the first TV advert in its 15-year history – as it attempts to address a dramatic value sales slump across its portfolio of premium bagged snacks.

The £2.5m campaign will make its debut on 11 September, running until late November with the strapline ‘It’s absurd what we do before Tyrrells gets to you’.

The ad features the black and white characters from the brand’s packaging, accompanied by “a distinctly Tyrrells English tone of voice”. It plays on “the absurd lengths” the brand goes to make its crisps, and is centred on the Tyrrells Court Farm production site.

The snack maker “wanted to bring to life the quirky and irreverent nature of the Tyrrells brand but also explain why our crisps taste so absurdly good”, said marketing director Adam Draper. The ad will be backed by VOD, outdoor and social media activity.

Amplify had sought to address flagging UK sales in the first quarter of 2017 by carrying out a dramatic May shake-up of its international management.

The surprise move saw the departure of president international David Milner, only four months after the former Tyrrells CEO took on the additional role of CEO UK & Europe.