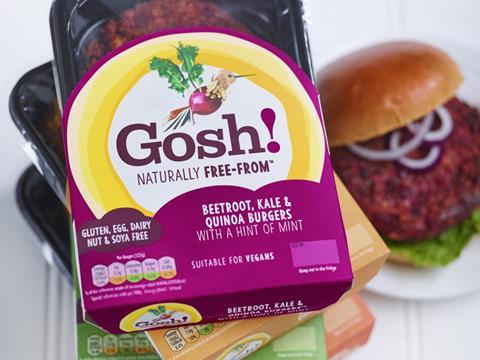 The Grocer understands the supplier has hired corporate finance firm Houlihan Lokey to “consider strategic options”, including the possibility of a sale, minority investor or refinancing.

City sources say the Milton Keynes-based supplier “could fetch more than £50m” in a sale situation, amid a clamour of interest from PE and trade investors.

Gosh has seen a period of rapid growth, surging from £5m of sales in 2015/16 to forecasts of £18m of sales for the current financial year.

The potential sale is the latest opportunity for investment in meat-free suppliers, after ‘bleeding burger’ creator Beyond Meat filed for an IPO earlier this week.

Check out thegrocer.co.uk/finance later this morning for the full story.

The Grocer this week carries stories on the latest on industry stockpiling, two ‘skinny’ alcohol brands are looking to raise expansion capital to cash in on growing demand for healthier booze alternatives and how upmarket retailer and deli business Sourced Market is to drive forward with rapid expansion plans after completing a £750k equity fundraise.

Click on thegrocer.co.uk/finance later this morning for all these stories and more.

Group sales were €430m for the three months to 31 October compared to €346.7m in the corresponding period last year.

On an underlying basis at constant currency, revenue increased by 18%, reflecting higher seed, crop protection and fertiliser volumes and prices in the period.

Ireland and the UK delivered a “good performance” recording underlying volume growth in agronomy services and crop inputs of 14.4% in the period. In particular, this performance was supported by seasonal timing and volume contribution from the Bunn fertiliser business which it acquired last year.

Origin stated: “The performance achieved in the first quarter of the year represents a positive start to the financial year for the group, supported by steadily improving sentiment on-farm.

“The autumn and winter cropping profile in our Ireland/UK and Continental European geographies provides a good foundation for the seasonally more important second half of the year. The Group’s newly acquired operations in Latin America will result in additional contribution in the first half of the Origin year, with solid progress on plantings providing an encouraging start to the year.”

One of the consumer sector’s major losers was Majestic Wine (WINE), which plunged 14% to 322p after revealing it slumped to a first half loss amid weak performance in its UK retail operations.