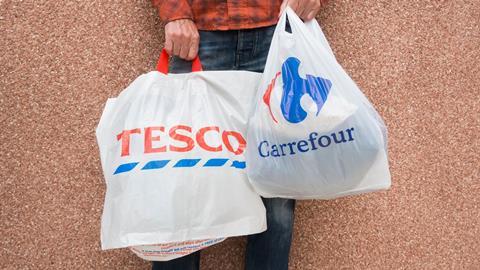 Does Tesco's Carrefour alliance suggest it is reverting to type?

As Sainsbury’s and Asda try to overturn CMA opposition to their merger, rival Tesco has been busy exploiting its own increased buying power, in a move that is causing a growing clash with suppliers.

Last week The Grocer revealed the UK’s biggest retailer and its new global partner, French hypermarket giant Carrefour, had summoned 30 branded suppliers for talks in Geneva, in a bid to secure better terms across multiple territories.

In doing so critics claim Tesco has jettisoned much of the collaborative approach that had seen it win back goodwill from suppliers since its 2014 accounting scandal. The move with Carrefour, they say, is a raid on the profit margins of suppliers, whose only incentive to co-operate is avoiding the dreaded threat of delisting.

So how does the global deal work? And are the new tactics symptomatic of a wider change in Tesco’s negotiation stance, extending to UK suppliers as well as its new international buying group?

Tesco and Carrefour are using their combined £120bn sales leverage to push for harmonised rebate terms across key suppliers in complementary markets. But despite Tesco’s claims the talks will strengthen long-term relations, The Grocer has spoken to several supplier sources who describe the move as a “money grab”.

Concerns have also been raised the alliance circumvents GSCOP - which only applies to sales in the UK - by threatening listings in other markets.

David Sables, CEO of Sentinel Management Consultants, claims the Carrefour tie-up is a symptom of a significant change in Tesco’s relationship with suppliers, extending to domestic as well as global supplier deals.

Relations with Tesco have deteriorated since it revealed plans to slash the number of suppliers it works with, under a so-called sourcing reset in June last year.

“They are saying ‘if you don’t give us a better deal, we’ll pull the trigger’”

“Since then, supplier views about Tesco have gone from 60-40 positive to 60-40 negative,” claims Sables, who believes the behaviour of the Carrefour World Trade Group is a move away from collaboration and data-driven negotiation, which had been Tesco’s hallmark under Dave Lewis and Jason Tarry.

“What they are effectively trying to do in these negotiations in Geneva is wait until your local market’s plans are sorted and then say to suppliers, right, we want an extra 1% or 2% on top,” says Sables.

“There appears to be no offer of anything to be traded. They are looking at the local profits and losses of these companies and saying, ‘look, if you don’t give us a better deal, we’ll pull the trigger and crash your business in several markets’.”

Sables says Tesco has not returned to the sort of behaviour that landed it in its biggest-ever financial scandal, over a £250m black hole in the retailer’s books, or the GCA probe of 2015, but that “fundamentally a decision appears to have been made to move from collaboration to increased margin and that is a turn for the worse.”

Some put the change in Tesco’s stance down to personnel. In July, a month after the threat to axe suppliers, it brought back former Tesco Ireland chief Andrew Yaxley as group chief product officer after Tarry’s promotion to UK CEO.

Yaxley, a former head of Tesco London and ex-UK commercial director, has a reputation as a fierce, some say “old school” negotiator. He has, say sources, been busy ringing the changes, including reversing a shake-up of the commercial team brought in by Tarry in 2017, which saw roles split between sales managers and buying managers to encourage collaboration with suppliers.

“Yaxley has a different way of working,” says one source. “He breaks things down into a series of very simple messages.”

“He has been holding meetings with all the top branded suppliers to look for better terms and his message has been simple: how can they justify such a huge premium compared to own label suppliers?

“The big branded suppliers are not spending the money on advertising like they used to, or NPD, and that is what Yaxley has been saying to them.

“Yes, it’s a tougher approach and suppliers will be defensive but there is logic behind it.”

The same is true of the Carrefour talks, the source says. “We are talking about global, branded suppliers, not the small guys.

“In contrast, if you look at core own label supplier relationships, I would say they are as good as they have been for four years, maybe even more collaborative.”

Opinion: Will Tesco & Carrefour suppliers get the deal they’re after?

But concerns remain that Tesco is undoing improvements in supplier relations.

“I was absolutely gobsmacked when Yaxley took over,” says another source. “It was basically a signal they are going back to an old school, I-want-some-money style of negotiation.”

Consultant John Butler adds: “The dynamics at Tesco have changed. Tarry was on a mission to change buying behaviour and did a great job. But suppliers are now being hit with really huge demands .

“The Carrefour tie-up was always going to hit branded suppliers, but I have a deeper concern that what’s going on in Geneva is happening much more widely in the UK. Suppliers all think it’s ridiculous and they are not responding well. It’s not going to work.”

Tesco vehemently denies returning to an aggressive approach. A spokesman says the Carrefour alliance was aimed at “working with suppliers on global growth opportunities, for example through better promotions and product launches”.

A key reason Yaxley ditched the sales structure was as a response to supplier feedback, it says. “They asked us to simplify, and create a single point of contact, and that’s what we’ve done. While our internal structures have changed, our commitments to trusted partnerships with our suppliers have not.

“Where suppliers are asking for a premium, it’s our role to balance the cost of that against protecting our customers. We’ve always been very clear we will be a champion for customers, and deliver great value. We will always challenge our suppliers to be innovative and to invest in serving customers better.”

The spokesman adds: “Since 2014 we have fundamentally reset our supplier relationships, and we have seen strong and sustained year on year improvements in supplier feedback ever since.

“For three consecutive years, we have been named the ‘most improved’ retailer in our supplier relationships by the GCA and ranked first in the independent Advantage survey - and our most recent Supplier Viewpoint survey in February this year showed our highest ever score for supplier satisfaction.”