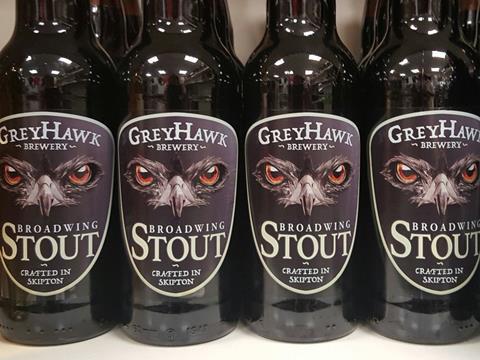 Twenty jobs have been saved at Yorkshire brewer GreyHawk after it was bought from administration following a dispute over the ownership of supermarket-listed beer brand Copper Dragon.

The Grocer understands that beer distributor Cornertrack - owned by pub group Burning Night Group - has bought GreyHawk out of administration.

Burning Night owns the Bierkeller, Around the World in 80 Beers and Shooters Sports Bar chains and GreyHawk is likely to focus on supplying its craft beers to the on-trade.

GreyHawk previously sold bottled ales via the off-trade sector, including listings with a number of supermarkets, most notably for Copper Dragon Golden Pippin.

GreyHawk assumed the licence to produce Copper Dragon beers when it bought the brewer from administration in 2015.

However, a dispute emerged over the ownership of the intellectual property of the brands following a change in ownership at GreyHawk in mid-2016 and the departure of Copper Dragon founder Steve Taylor.

Companies House records show Taylor established a new Copper Dragon company in October 2016 and petitioned to wind up GreyHawk in May over claims of monies owned.

The Grocer understands a dispute emerged over the rights to produce and distribute the Copper Dragon brands including Golden Pippin and Best Bitter, with high court action ultimately preventing GreyHawk from producing the brands in recent months.

The brands have since reverted to Taylor’s new Copper Dragon vehicle and will now be produced by Recoil Brewing Co, a brewer set up by Taylor’s son Matthew.

Steve Taylor added that since the resolution of the IP dispute Copper Dragon has secured listings in Booths, Tesco, Asda and Morrisons.

Grayhawk appointed administrator O’Haras on 1 July following the winding-up petition from Copper Dragon on 15 May.

O’Haras refused to comment on the process and The Burningnight Group was unable to provide details of the investment at the time of going to press.