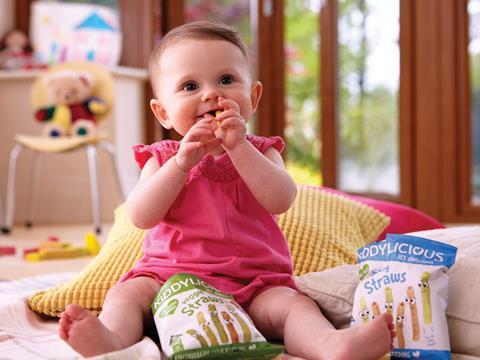 Fast-growing infant snacks and meals brand Kiddylicious is understood to be exploring a possible sale.

Sources suggested the process is likely to attract interest from both larger trade buyers and private equity investors, given the brand’s growth profile and healthy snacking credentials.

The brand has grown sales rapidly in recent years, both in the UK by expanding into wet food with Little Bistro ambient ready meals and through a concerted focus on exports with sales now in almost 30 countries including Australia, China and South Africa.

The Kids Food Co annual accounts do not split out sales and profits as it was still considered a small company for UK accounting purposes for its 2017 financial year.Kiddylicious generated UK retail sales of £18.5m in the year to 16 June, growing at almost 70% year-on-year.

The brand claims to be responsible for almost 75% of the growth in the entire category in the UK last year. It has continued to rapidly build sales in 2018, largely driven by its strong focus on exports, and current global retail sales are running at around £50m a year pro-rata.

Founder Sally Preston, the company’s largest shareholder, said in April the company made a net profit of £1.2m on sales of £16m in 2017 with an EBITDA margin of 13%, though the headline sales and profit figures are expected to significantly increase in the current financial year.

Dealmakers suggested Kiddylicious could achieve a price tag of around £40m-£50m, based on the big multiples achieved by other high-growth brands in child nutrition and healthy snacking space.

Bear fruit snacks maker Urban Fresh was sold for £70m on projected pre-tax profits of £4.9m and sales of £27m to Lotus Bakeries in December 2015, mirroring similar big prices paid for Natural Balance (£60m for a 67% stake) by Lotus and Ella’s Kitchen (£66m) by Hain Celestial in 2013.

One source cautioned the debate around salt and sugar levels in products targeted at infants could give some suitors pause for thought, given the natural sugars in the fruit ingredients across a number of Kiddylicious products and some added sugars for flavouring.

Kiddylicious is keen to stress it avoids adding sugar where possible and its Tiddlers, Melts and Wriggles products do not contain any added sugar.