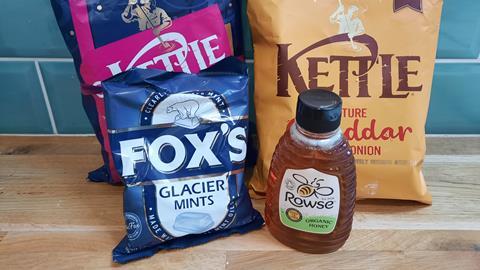 Who will have the stomach to swallow Valeo Foods for  upwards of £1.5bn?

Reports indicate a £1.5bn price tag on Valeo Foods – but is the timing right for a sale?

Timing is everything. And CapVest may have picked the perfect moment to hire bankers to attempt a sale of Valeo Foods. Momentum is picking up in M&A activity, valuations are high, private equity is cash rich, debt markets are favourable and Covid has put the wind behind the sails of large consumer groups.

If reports are accurate, advisor Goldman Sachs is hoping to hang a €1.7bn (£1.5bn) price tag on the ambient food group behind brands as diverse as Kettle, Rowse, Jacob’s and Balconi.

Is there a buyer with a large enough stomach to swallow Valeo? Has the pandemic created an appetite for a Premier Foods-like stable of disparate grocery brands? Or is an IPO a likely end goal?

Since then, the group has embarked on a dizzying acquisition spree, gobbling up 18 ambient businesses to date, including most recently tortilla chips producer It’s All Good and German marzipan maker Schluckwerder.

It has resulted in some large numbers: annual sales have grown to €1.2bn, with 600 million units of branded and own label products shifted a year in 106 countries worldwide. Almost 80% of the products are manufactured at one of its 20 factories across the UK and Europe, where more than 4,500 staff are employed. It owns 85 international brands, 13 of which are market leaders, with 5,692 SKUs listed at 715 international retail partners.

“CapVest have done a very good job, but the Valeo model is basically very simple and the classic buy-and-build scale play, with the whole being worth more than the sum of the parts” one senior City source says.

Synergies are identified and extracted, leaving an enlarged group to be sold for a higher multiple than was paid for the individual businesses, the source adds.

EBITDA has doubled since 2017 to in excess of €150m as value is squeezed out of every business and factory.

And Valeo are notorious for pushing hard on valuations. “They don’t like to overpay and have made a habit of picking up assets relatively cheaply,” another dealmaker says.

This arbitrage trick goes some way to explaining how a group whose portfolio includes products as wide-ranging as coffee, pasta, flour, canned veg, preserves, honey, sweet and savoury biscuits, cakes, crisps, marzipan and nostalgic confectionery is valued at €1.7bn.

The big question is who would be willing to do a deal of this size?

One dealmaker points out that aside from Rowse, Kettle, Jacob’s and Balconi, as well as a handful of others, the portfolio doesn’t contain many A-list brands and also has a lot of low-margin private label and contract manufacturing.

“Buyers looking for strategic cohesion and glamour ought to look elsewhere,” he adds.

“Even if €1.7bn is a bit full in terms of price, anything above €1bn is a big deal, and that limits the number of options available, especially as large consumer groups are more focused on divesting rather than buying assets.”

That leaves the giants of private equity.

“Scale in itself is appealing and attracts a premium valuation,” another City source says.

“If I’m a big PE firm I need to write some big cheques to justify my existence. The likes of KKR, CD&R, Bain, BC Partners, Blackstone and their peers are very keen to get into the food sector, but there are almost no assets in the UK industry of the sufficient size needed to do a deal.

“CapVest have done a great job in building Valeo into something that is attractive to big PE, and a shelf-stable, ambient food group is a pretty good place to put a lot of money right now, with reasonably low risk.”

Valeo, like Premier Foods and other big consumer groups, has benefitted from the extra demand for established ambient grocery brands during the coronavirus pandemic, making the industry a good defensive bet for the mountains of liquidity at the disposal of private equity.

As billions of pounds of extra income has flowed from households through the tills of supermarkets, market leaders such as Rowse have cleaned up, with the honey brand’s UK retail value jumping 23% to £67m last year [Nielsen 52 w/e 5 September 2020]. The host of secondary and tertiary brands in the portfolio, which normally wouldn’t shoot the lights out in terms of growth, also performed strongly as shoppers stocked their cupboards with long-life products during lockdown.

Moving out of the Covid crisis as vaccines hopefully take effect, a Valeo backed by a global PE powerhouse suddenly becomes an even tougher proposition with the muscle to do deals currently beyond CapVest’s reach, possibly looking outside its current UK, Irish and European markets to enter North America for the first time.

“The average deal size for Valeo is somewhere between £50m and £100m. A bigger PE owner could do a £500m deal and, relatively quickly, turn £1bn of revenues into £5bn and then you’ve got something of real scale,” a dealmaker says.

2020: It’s All Good, an own-label snack manufacturer and owner of premium tortilla chips brand Manomasa, is snapped up

But what if large PE doesn’t bite?

Goldman is understood to be running a dual-track process for Valeo, with an IPO option as a safety net.

City sources ultimately think a stock market listing is unlikely and is more the preferred option for the other big food group owned by CapVest.

Eight Fifty Food Group, home to pork producer Karro and seafood supplier Young’s, is rumoured to be prepping a flotation for later this year. The protein-focused player has a better narrative for potential investors to get behind, as well as favourable comparisons to draw upon, with the likes of Cranswick and Hilton having a strong track record on the London exchange.

The closest peer to Valeo is Premier Foods, which until the past couple of years has been classed as a zombie trapped beneath a mountain of debt and large pension obligation.

“Valeo sits less well on the public market,” a City source argues. “The management team, led by Seamus Kearney, have fared very well in the private arena, operating under the radar. There is a great deal of public scrutiny that comes with a stock market listing and that adds extra, unnecessary hassle.”

Investment analysts may also struggle to find the logic behind a Valeo listing, another source adds.

“The way the group has grown up makes it favourable for debt providers, which means it can, and indeed should, put large amount of debt against it. That is the right capital structure for Valeo, but public markets are less favourable to leverage.”

Premier Foods recently revealed an all-time low net debt/EBITDA ratio of 2.3x, with a target of 1.5x, whereas Valeo, which has borrowings of almost €900m, is leveraged by about 5x.

“Valeo is fundamentally a slow growth proposition with a reliable ability to churn out lots of cash, and that makes it a very obvious debt play and less obvious equity play,” a dealmaker adds.

Shore Capital analyst Clive Black says investors will assess the virtues of Valeo on its merits.

“A broad portfolio has been acquired and, in the main, Seamus Kearney & Co have added both operational and portfolio value to the business,” he says.

“Leverage is quite fulsome, certainly from a listed capital markets perspective, and so de-leveraging could be a component of any IPO rational.

“Ultimately, the market will always have an appetite for well-run companies.”

Either way, a deal is a long way off, with Goldman yet to prepare the IM to send out to potential buyers, and unlikely to complete until after the summer.

In the meantime, Valeo is expected to continue its buy-and-build strategy, with an abundance of options available across the UK and Europe.

“There are loads of bolt-ons to be done and the consolidation journey is still progressing,” a City source says. “A genuine pipeline of further acquisitions in various stages of progress will also help bring PE firms to the table when it is time to launch the auction.”

It remains to be seen if CapVest gets its timings right.