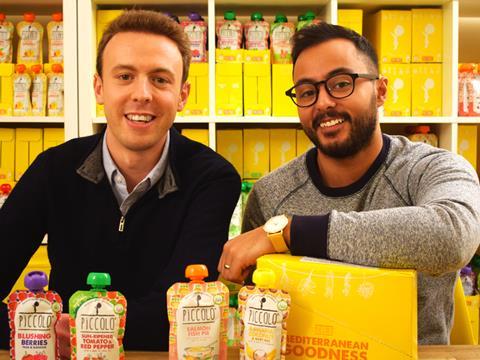 Organic babyfood brand Piccolo has poached the UK sales director and head of exports at dessert maker Gü Puds to spearhead its expansion at home and overseas.

James Gilks and Oliver Pinkus join Piccolo, founded by Cat Gazzoli in 2016, as head of UK sales and head of international sales respectively.

Gilks joined Gü in early 2013 as an account manager for business with Tesco before being promoted to sales controller responsible for trade with the supermarkets. He later became UK sales director, overseeing all of grocery and convenience.

Prior to Gü, Gilks started his career as an account executive at Young’s Seafood and has also worked for Greencore.

“I joined Piccolo because I could really see the opportunity to be at the forefront of a business that is gaining real traction and has a genuine purpose,” Gilks said.

“Cat’s commitment to donating a portion of the profits to charity coupled with her desire and passion to improve the health and quality of baby food is both inspiring and motivating.

“I look forward to building on the momentum that 2017 has brought the business so far and working closely with our customers and really push the category forward.”

Pinkus led Gü’s international sales operations across Europe, Middle East and Australasia from 2016 until the end of 2017. He joined Gü in 2014 as UK commercial manager looking after out-of-home, online and convenience channels before taking on a role as head of new business role in 2015.

He started his fmcg career with commercial roles at drinks giant Diageo, predominantly on the wholesale side of the business. “Piccolo has a deeply international mindset, which is what attracted me to the business,” Pinkus said.

“Since starting, I have seen an astonishing level of incoming demand from retailers and distributors in all corners of the globe. For the babyfood category, the growth is happening right now and we need to be out there to convert.

“Fortunately, Piccolo has built a sufficiently robust base in the UK to allow it to pursue that growth and this presents me personally with a genuinely exciting challenge at this stage of my career.” Piccolo is using the investment by DSG to support growth in the UK and expansion outside Europe to China, Korea, Singapore and India.

Its babyfood pouches are listed in more than 1,000 Waitrose, Asda and Boots stores in the UK, as well as Ocado, Planet Organic and Whole Foods Market. Revenues are forecast to hit £3m in the 12 months ended 31 March 2018 and double in the following year.

Gazzoli said: “As we approach our second birthday, it really feels like Piccolo is firing on all cylinders.

“Our new hires are a great addition to our fantastic sales team. Combined with our recent angel investment and an exciting NPD pipeline, they ensure we are set up for a thrilling 2018, sharing the things we make with even more parents across the country, continuing our commitment to give back, and championing the Mediterranean approach to food from the earliest age.”