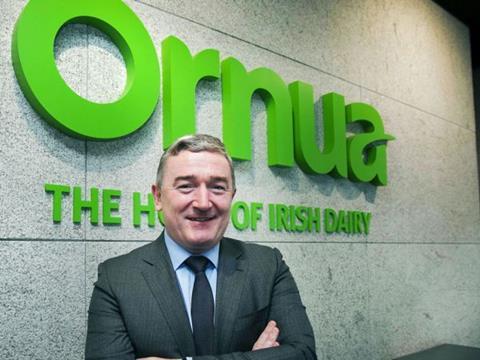 John Jordan, the boss of Ornua’s European business, will succeed Kevin Lane as its new CEO in June, the Irish dairy co-op has announced.

Jordan - currently CEO of Ornua Foods Europe, Middle East, Africa and Asia - joined what was then the Irish Dairy Board as a graduate trainee in 1993. Since then he has worked in a variety of roles within the business, including a stint as CEO of Ornua’s former US division DPI Speciality Foods, and marketing director of consumer foods.

He will take over at the helm of the dairy co-op, which owns the Pilgrims Choice cheese brand and markets Kerrygold around the world, on 30 June following the resignation of Kevin Lane, who is stepping down after eight years.

A spokesman for Ornua said a replacement for Jordan - who ultimately had responsibility for its UK division in his current role - would be announced in due course.

Jordan had “proven leadership skills”, said Ornua chairman Aaron Forde, and brought to the role a deep knowledge of the business, the dairy sector and proven international executive experience.

“As chief executive, he will continue to develop and drive Ornua’s strategic agenda as per our five-year strategy ‘Ornua 2021’, to deliver sustainable long-term value for Ornua’s members’ farmer base. My fellow board directors and I look forward to working with John as Ornua enters a new chapter of growth.”

Jordan, who was interviewed by The Grocer for the Dairymen supplement in 2016, said he was “delighted and very proud” to take over from Lane.

“As we face into the challenges of ongoing market volatility, significant uncertainty surrounding Brexit and other areas of international trade, I am confident that Ornua is well-positioned to manage all of this from a position of strength,” he said.

“With a strong platform of financial performance over the past few years and a clear articulation of strategy to deliver growth of €3bn in revenues by 2021, I welcome the opportunity to continue to develop and build on the remarkable performance we have achieved thus far.”