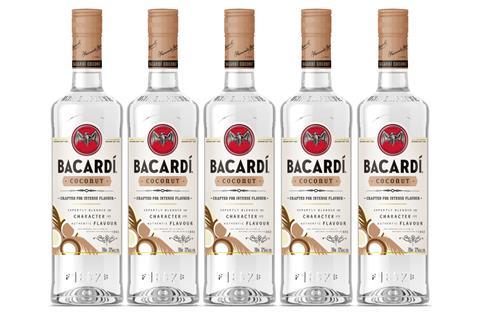 Bacardi has mounted a challenge for Malibu with its latest NPD.

Bacardi Coconut (32% abv) is made by infusing white rum with coconut flavours and rolls exclusively into Asda from 20 June (rsp: £16/70cl).

Yet it could face stiff competition from Malibu, which was recently given a major makeover and new RTD brand extensions by owner Pernod Ricard.

It’s the latest in a series of flavoured rum launches from Bacardi, which is looking to tap growth in flavoured rums – its core white rum, Bacardi Carta Blanca, has struggled over past years as shoppers’ tastes turned towards flavours.

Bacardi was overtaken in value sales by Diageo’s Captain Morgan in 2018, making Captain Morgan Britain’s top-selling rum after years of dominance from Bacardi.

It kicked its move into flavours off last year with Bacardi Ginger, which was followed by Bacardi Spiced earlier this year.

However, sales of Carta Blanca are still declining, falling £2.9m to £96.1m over the last year [Nielsen].