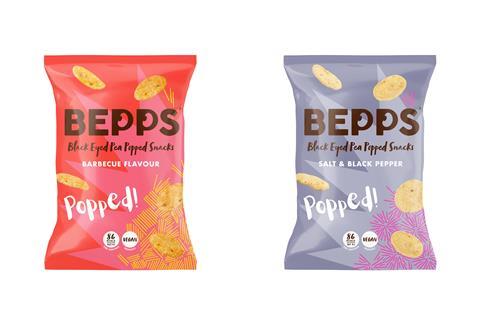 Bepps is expanding its lineup of pea-based snacks with its new range, Bepps Popped.

The Popped range is made with a combination of popped chickpeas and black-eyed peas, with the latter providing “extra crunch”, according to Bepps.

Per serving, they contain 86 calories and claim to be high in fibre, offering a “better for you” alternative to other popped chips and crisps, said Bepps.

The supplier also claims the NPD is the first branded popped pea-based snack in the UK.

Two flavours – Sweet Chilli and Salt & Vinegar – have rolled out in the retailer’s vegan bays in sharing bags.

Bepps founder Eve Yankah said that with the NPD and retail partnerships, Bepps was “moving to the next level” and making “good headway” on its mission to provide “truly accessible and health-focused snacks for the mainstream consumer”.