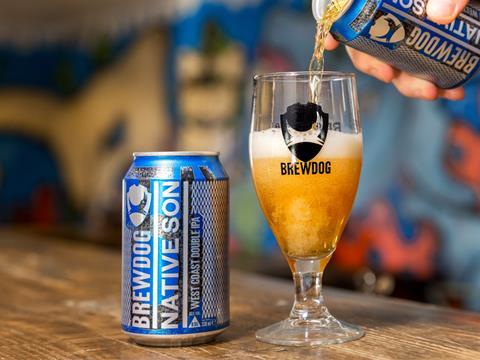 BrewDog has followed the launch of its “accessible” Indie Pale Ale with a US-style double IPA more than twice the strength.

The brewer has boosted its core range with Native Son, an 8.5% abv ‘West Coast’ DIPA, weeks after it unveiled the “more sessionable” 4.2% Indie Pale Ale.

Native Son rolled out this week in a 330ml can (rsp: £3.70). BrewDog said the “super dank” beer had flavours of “enormous resin, pine, citrus zest and cut grass on the nose”.

The brewer’s co-founder and CEO James Watt last week told The Grocer that future releases would go “completely to the other side of the spectrum” after the “slightly more accessible” Indie Pale Ale.

The Grocer revealed last month BrewDog plans also to release a new dry-hopped lager over coming weeks, called Lost Lager. It will be brewed with classic European ‘noble’ hops, and is understood to be ready for bottling this month.