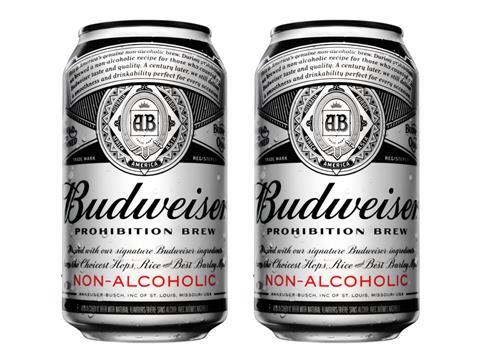 The brand, which was registered with the Intellectual Property Office earlier this month, is positioned as a premium, less sweet drink, intended to taste precisely like Budweiser but with an 0.0% abv.

AB InBev told The Grocer the brand was “being explored” in the UK alongside other opportunities within the low and no-alcohol space, but added it was “very early days”.

The completely alcohol-free offering had been developed for adults who wanted to enjoy the “refreshing taste of a beer with the great character of Budweiser at any time and for any occasion”, according to Nick Robinson, AB InBev UK & Ireland marketing director. “The team was really pleased” with the initial reception of Prohibition Brew, which was made using the latest “de-alcoholisation” technology, following its debut in Canada, he said.

It was launched in May by Labatt - which has brewed Budweiser in Canada since the 1980s - as part of a wider mission at AB InBev to offer an increased variety of ­beverages with less and no alcohol content.

Third-party research conducted since launch had revealed 70% of Canadians who tried the beer intended to ­purchase it again, Robinson added.