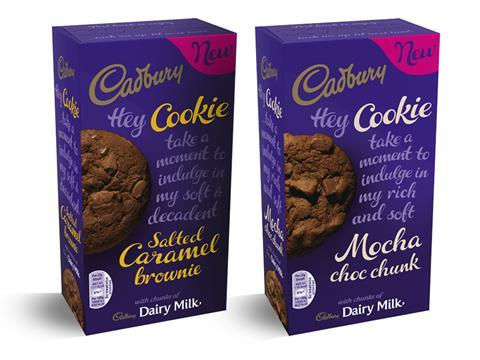 Burton’s Biscuit Co is continuing to ramp up NPD activity as it seeks to add value to its leading brands and regain market share lost to rival United Biscuits.

The latest addition to its portfolio is Cadbury Cookies, the first premium range for the Cadbury biscuits portfolio, which has suffered a value sales slump of 14.6% in the past year [Nielsen 52 w/e 10 October 2015].

Rolling out from the end of this month with initial listings in Waitrose and Ocado, the two soft-baked SKUs - in Salted Caramel Brownie and Mocha Choc Chunk - will be available in packs of eight (rsp: £1.99).

Marketing activity for the launch will focus on the ‘sweet sign-off’ occasion - described as “a sweet and indulgent hit to complete a meal” by David Costello, head of customer category management at Burton’s.

He claimed the NPD - expected to generate £6m of sales in its first year - would provide an incremental profit opportunity for retailers because cookies consistently drove category value within sweet biscuits.

“By introducing Cadbury Cookies into the £66m Cadbury Biscuits portfolio [Kantar 52 w/e 28 February 2016], we are confident this exciting new range will encourage shoppers to trade up,” he said.

The launch follows Burton’s recent introduction of Choc Dipped and Soft Centre biscuits for the new Maryland Creations range, and its overhaul of Jammie Dodgers. It comes as the company seeks to add value after its most recent annual accounts showed a sales drop of 6.3% to £314.9m during its first year under the ownership of Ontario Teachers’ Pension Plan.

The biscuit maker - which last month announced the loss of its MD for UK & Ireland, Ian Deste, after just five months in the role - is currently locked in talks to buy Fox’s Biscuits from 2 Sisters, having missed out in 2014 on purchasing United Biscuits.