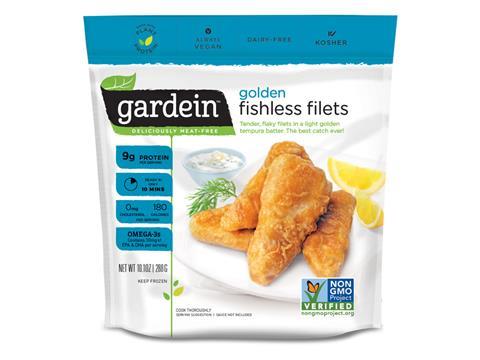 Canadian vegan food brand Gardein has picked up its first UK supermarket listings and will go on sale in the new year.

The brand – owned by US-based Conagra Brands – has gained listings in Sainsbury’s for a five-strong range of its frozen meat alternatives.

Its products are made with soy, wheat and pea proteins, as well as mix of ancient grains including quinoa, amaranth, millet and kamut. The brand is set to go on sale in 72 Sainsbury’s stores from 2 January, with wider distribution in 317 stores and online from 21 January.

Gardein products had previously been used in the UK as an ingredient in defunct meat-free grills brand Grassington’s in 2008. Its full range, featuring almost 40 meat alternative and ready meal products, is stocked in major retailers throughout the US and Canada.

It comes ahead of a major plant-based NPD push for Sainsbury’s for January, designed to tie in with Veganuary, which is predicting a record 300,000 pledges to ditch animal products for the duration of the month.

Sainsbury’s has already invested in a wave of plant-based NPD this year, adding Danish meat alternative brand Naturli’s burgers and mince to its meat aisles during the summer, alongside listings for Dutch brand Vivera and the Meatless Farm Co. The retailer also added a new own label Love Your Veg vegetarian line in June, to sit alongside its Love Meat & Veg range aimed at the flexitarian market.