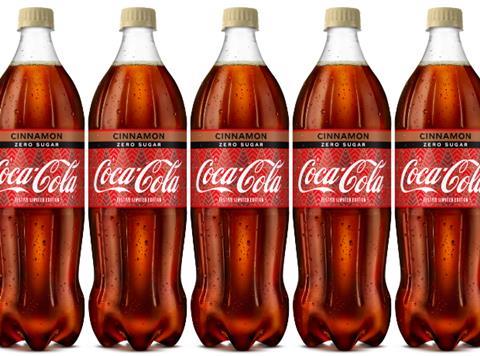 The Cinnamon variant is available in a 1.25-litre PET bottle

Coca-Cola is gearing up for Christmas with the addition of a festive flavour for Zero Sugar and an on-pack push across its core portfolio.

The limited edition Zero Sugar Cinnamon variant has launched in a 1.25-litre PET format featuring a red and gold design. Joining the soda’s Vanilla, Cherry and Peach flavours, it came after Zero Sugar was “the fastest-growing cola brand during Christmas 2017” according to the drink’s maker Coca-Cola European Partners.

The supplier has also kicked off a competition offering shoppers the chance to win a pair of tickets to Capital FM’s annual Jingle Bell Ball, which will see major music artists perform live on stage. Last year the event sold out in record time as listeners snapped up tickets in under 45 minutes.

The promotion will feature for five weeks across on-the-go packs of Coca-Cola Original Taste, Diet Coke and Coca-Cola Zero Sugar. Consumers must enter a unique code online to be in with the chance of winning a pair of tickets daily.

The “early arrival” of CCEP’s yuletide push was set to be followed next month by more activity that would “keep Coca-Cola at the centre of Christmas celebrations for both consumers and retailers” said the company’s GB customer marketing director Simon Harrison.