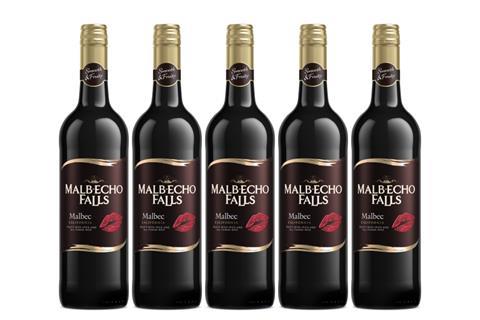 Echo Falls has segued into malbec with the launch of ’Malb-Echo Falls’.

The NPD (12.5% abv), is a Californian malbec billed as “a new premium offering” with “a flavour profile consisting of raspberries, cherries and blackcurrants, with toasted oak and a touch of mocha”. It has rolled into Asda, Bestway, Ocado, Landmark Group and Today’s (rsp: £6/750ml).

Owner Accolade Wines said the launch would tap “the huge boom in USA malbec varietal  wine, which is growing at 19% year on year”.

“Echo Falls is perfectly placed to drive further category growth and consumer interest in malbec as it is a brand of mass scale and popularity, which gives consumers the confidence to try a new style of wine.”

It’s the latest in a series of brand extensions from Echo Falls to hit the market over recent months: the sparkling ProsEcho Falls launched in December 2018, followed by Echo Falls Summer Berries Gin in May.