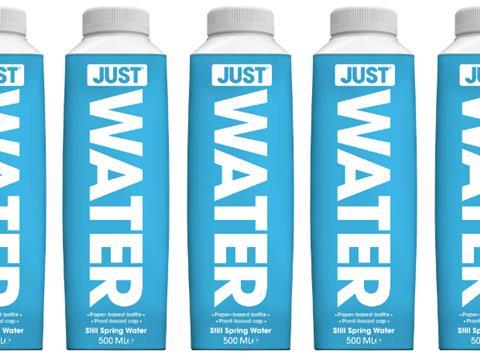 The bottle’s cap and shoulders are bio-plastic, while the main body is a sustainable paper carton

Just Water, the eco-conscious bottled water brand from the US, has arrived in the UK, rolling out to Boots and Whole Foods Market.

Founded in 2015 by Jaden Smith, son of Hollywood star Will Smith, Just Water is packed in 82% renewable packaging. The bottle’s cap and shoulders are bio-plastic made from sugarcane, while the main body is a paper carton from sustainably managed forests.

In the UK, the still spring water itself is bottled from a sustainable source in Northern Ireland.

Just Water’s British launch came “after rapid growth in the US” said Belfast’s Red Star Brands, which is handling distribution.

The US brand was an example of one “daring to be different by challenging traditional perceptions of food and drink” added Red Star managing director Clark McIlroy.

“Plastic usage has become a hot topic in recent years and, with six in 10 UK shoppers looking to minimise their own plastic consumption, there is a definite demand for ethical brands like Just Water to enter the UK market and disrupt consumer habits.”