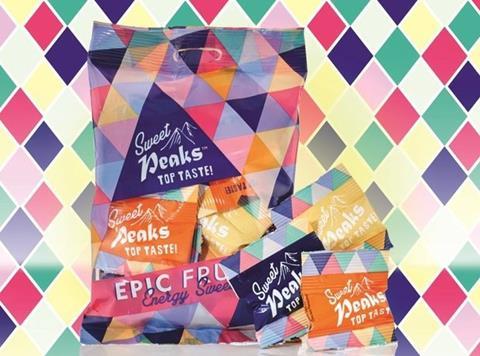 Confectioner Maxons is hoping to secure mainstream listings for a new energy-boosting product that can be eaten as a sweet or dissolved into a drink.

Sweet Peaks, which soft launched into independent specialist retailers in March, is sold in a bag of ten sweets in a mix of three flavours - mixed berry, orange, and lemon & lime (rsp: £1).

The individually wrapped sweets, which contain a mix of simple and complex carbohydrate, could be eaten individually for a quick energy boost or dissolved in water to make a “pleasant tasting” energy drink, said the Sheffield-based business. Established more than 100 years ago, Maxons produces more than 70 types of boiled sweets for UKs wholesalers, retailers and private-label producers.

Targeted particularly at “active outdoor people”, the sweets would also appeal to anyone in need of a boost containing no caffeine or “nasties”, said MD Richard Pitchfork, describing Sweet Peaks as a tasty alternative to other energy supplements, he said.

The company was currently in talks with Halfords, Go Outdoors and Sports Direct with a view to approach the major supermarkets shortly, said Pitchfork.