Fmcg brands get ready for Veganuary with raft of NPD 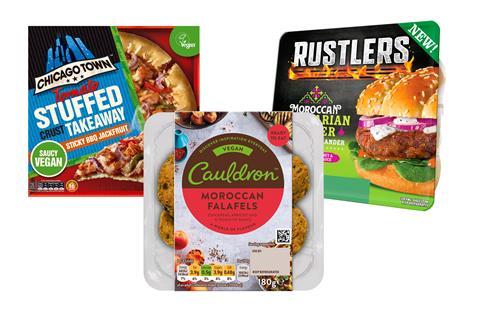 Rustlers has created its first ever meat-free microwavable burger, featuring a Moroccan-style veggie falafel patty with mango chutney and a yoghurt and mint sauce (rsp: £2/154g).

The Kepak-owned brand had been looking to enter meat-free for some years, said its marketing and business development director Adrian Lawlor. It had “multiple concepts in our funnel in the plant-based space” he added.

“We’re quite prudent about what we put in the range and when, but we are working on a strategy that this could be a much bigger play.”

Rather than jump on the bandwagon early, Rustlers had waited to launch a plant-based option until the trend filtered into quick service restaurants like McDonald’s and Burger King, he added. “Concepts that work really well in QSR tend to work well with us.”

The brand chose to go vegetarian rather than vegan to maintain “high levels of familiarity” rather than alienate shoppers, he said - hence the falafel element rather than a plant patty like the Beyond Burger.

It features peppers, onions and jackfruit in a sticky BBQ sauce with dairy-free ‘mozzarella’, cased in a tomato-stuffed crust.

The crisps feature red leicester-style ‘sheese’, which is produced in a completely vegan factory, eliminating any chance of cross-contamination with animal products.

The crisps will hit Budgens from early January, followed by Tesco and Morrisons at the end of the month (rsp: £1.99/135g).

Meat-free giant Cauldron has also reformulated the recipe of its Moroccan Falafels to make them vegan, by replacing the honey used in their production with agave.

Cauldron said the change was “cost neutral” and stressed it would not affect the wholesale price.

It comes as the Quorn-owned supplier saw sales drop 4.1% in the supermarkets this year [Nielsen 52 w/e 7 September 2019].