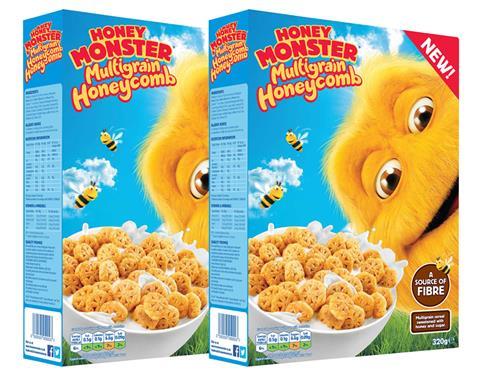 Halo Foods has unveiled its first Honey Monster-branded breakfast cereal to score an amber GDA traffic light rather than a red.

Rolling out next month, Honey Monster Multigrain Honeycomb (rsp: £2.29/300g) contains 22g of sugar per 100g - just below the 22.5g level at which foods are regarded as having a high level of sugar and must be labelled with a red traffic light.

The launch comes nine months after Halo relaunched Sugar Puffs as Honey Monster Puffs and cut the sugar content from 31g to 29g - which it this week said was the highest sugar level any of its cereals would contain from now on.

The sugar levels in Puffs had been cut by a third over the past decade, said the supplier, adding the launch of Multigrain Honeycomb was part of its commitment to cut sugar levels in cereal.”We are on a long-term sugar reduction strategy and, having put traffic-light nutrition information on front of pack, it is great to bring a product to market labelled amber for sugar content,” said Halo Foods marketing director Andy Valentine, adding the cereal took six months to develop.

“It is not easy to get low sugar levels and deliver a taste families will enjoy,” added Valentine. “We make a puffed wheat product with no added sugar, and that is a very niche product.”

Multigrain Honeycomb used honey and syrups to get a ‘Honey Monster’ flavour, said Valentine. “The honeycomb shape makes it visually interesting, and it has a nice crunchy texture. It is a good complement to Honey Monster Puffs.”

Multigrain Honeycomb is expected to roll out initially to the convenience channel and Halo is currently determining listings with the major supermarkets. The launch will be promoted with activity to drive awareness, and as part of an umbrella marketing campaign for the overall brand.

Honey Monster brand sales remain down year on year despite the relaunch, but brand sales have grown each successive quarter since then, from £2.1m in the 12 w/e 3 January to £2.7m in 12 w/e 20 June [IRI].