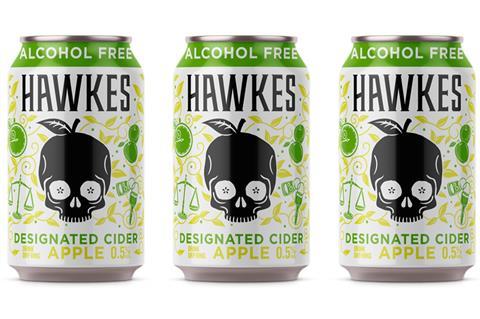 It is made from British dessert and cider apples

BrewDog-owned Hawkes Cider has launched a low-alcohol cider it claims is the first brewed in London.

Made from British dessert apples and cider apples, Designated Cider (0.5% abv) is billed as a “fresh, juicy, gently sweet” drink.

It has rolled out in a 330ml can (rsp: £1.30) to 50 BrewDog bars across the UK, as well as exclusively on draft at BrewDog’s AF bar near Old Street, London, and at the Hawkes Taproom in Bermondsey.

In line with Dry January, BrewDog is offering a free can to designated drivers when they show their car keys at any BrewDog branch or the Hawkes Taproom until the end of the month.

Hawkes’ founder Simon Wright said the cider was “not only exciting because it’s the first time a non-alcohol cider is being made in London, but it finally means people who want to abstain or have a dry January can have a really good cider”.

William Reed – the publisher of The Grocer – has launched a new trade exhibition exclusively for the low and no-alcohol sector. For more information visit low2nobev.com