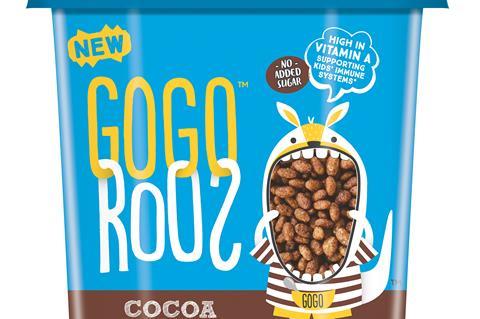 Gogo Roos’ 40g pot is made from fully recyclable rPET

Children’s healthier breakfast startup Humble Acre is set to make its debut with Gogo Roos, a no-added-sugar range of cereal.

A cocoa variant will launch at London’s Allergy & Free-From Show in early July in an on-the-go format. Made with crispy rice, chickpea, sweet potato and chicory root, it contains 9.3g of naturally occurring sugar per 100g – compared with the 17.1g of sugar in Cocoa Pops (which contains added sugar).

It would be joined later in the year by large-format packs of the cereal, and then by other healthier Gogo Roos breakfast lines including an “on-the-go option made with plant-based milk” he added.

The new brand arrives after Action on Sugar found in February that nearly half of child-friendly cereal still received a red traffic light label for their high sugar content – despite Public Health England’s target for manufacturers to reduce sugar by 20% by 2020.

Of the remaining breakfast products, 48% bore amber labels, with only two receiving a green label for being low in sugar.