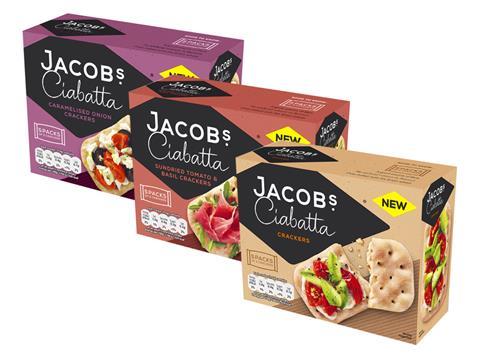 Jacobs has launched Ciabatta Crackers as it continues to drive a revival bid that began at the start of 2015.

The NPD will be available from 15 August in three variants - Original, Sun Sundried Tomato & Basil and Caramelised Onion (rsp: £1.39/140g) - and will target the lunchtime market.

Consumption of sandwiches has fallen 6% year on year [KWP Usage 52 w/e 29 March 2016], which the brand sees as an opportunity for mealtime alternatives, such as crackers.

The launch of Jacobs Ciabatta Crackers follows a string of rejuvenating moves by the brand after years of decline. From 2009 to 2013, the three-month penetration of Jacobs Cream Crackers fell from 25% to 19% within the category [Kantar Worldpanel 2013], while the Jacobs Biscuits for Cheese selection went from 24% to 18%.

In January 2015 the brand overhauled its image, with a redesigned logo and new product launches including Crispbreads and Cracker Crisps to compete with rivals such as Ryvita.

Ciabatta Crackers will be supported by a £2m-plus investment, including TV, digital and social media.