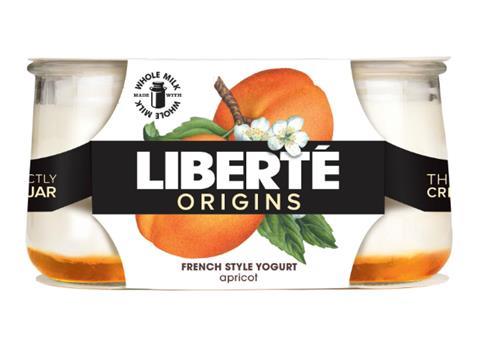 The yoghurt is packaged in glass jars to reduce plastic waste

Liberté has added a range of French-style yoghurts in glass pots to its portfolio as part of a push to bring nostalgia to the category.

The Yoplait-owned brand launched its Origins lineup in Tesco at the end of last month featuring strawberry, vanilla and apricot variants (rsp: £2.50/2x135g) .

The traditional French style meant the yoghurts were set in their pots, rather than made in batches and decanted into plastic pots later as is common, said the brand. Each Origins yoghurt contains milk, fruit and yoghurt cultures, which are set in a glass jar for at least five hours.

Its launch came after the release of Mintel’s Global Food & Drink Trends report 2018 found there was increased demand for updated variations on old-fashioned recipes and flavours. The range would tap into the trend for traditional offerings, while its glass jars are set to meet shopper demand for reduced plastic consumption, said a spokeswoman.

Origins has been positioned as a daytime snack, encouraging consumers to trade up following the launch of Yoplait’s Oui brand which rolled out across the US in June 2017.

“The new production method and format will make sure that we stand out against other brands in a competitive market,” said brand manager for Liberté UK Sam Horner. “This new product launch firmly marks the brand’s intentions to evolve the premium yoghurt category.”