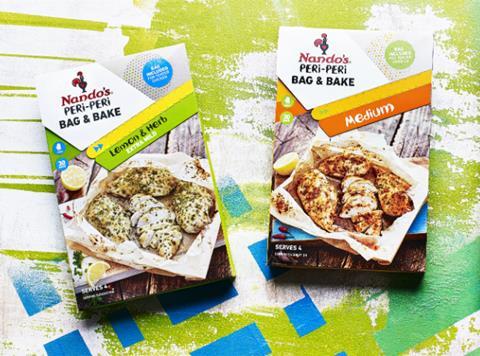 Nando’s has expanded its grocery portfolio with Bag & Bake, a range of dry cooking sauces to tap the popularity of “restaurant-inspired” cooking.

The three-strong bake-in-bag lineup, set to roll out in early April to Asda, was aimed at shoppers who wanted to recreate Nando’s Peri-Peri chicken at home in convenient fashion, said the South African restaurant chain, which is making its debut in the packet mix category.

Bag & Bake was aimed at families and younger shoppers with whom the Nando’s brand over-indexes, according to its head of category, Sam Frost. “Younger consumers are short on time and choose the oven as a convenient cooking tool, hence why Bag & Bake came around. The new product provides simplicity for cooks by helping them to create easier, tastier restaurant-inspired meals.”