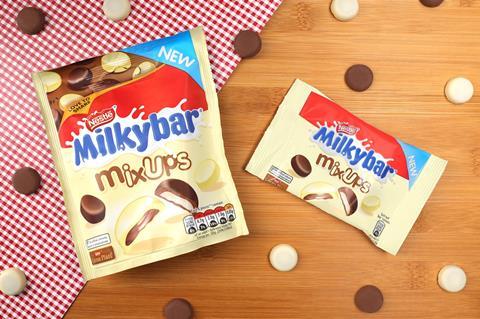 While Milkybar has traditionally been made in Nestlé’s York factory, Mix Ups is made in the company’s facility in Fawdon, Newcastle, on the same production line as that used for Rolo. The NPD also uses the same milk chocolate recipe as Rolo.

Fans of Milkybar had “been asking us to mix white chocolate with milk chocolate for a long time”, said assistant brand manager Alberto Pisanello. “Milkybar is famously white chocolate so it needed to be something special if we were going to mix things up.”

However, Mix Ups is not the first Milkybar offer to combine chocolate varieties. In March 2018, Nestlé claimed a world first with the launch of Wowsomes, a chocolate bar with ‘hollow’ sugar crystals that reduce sugar content without affecting sweetness. It is made with milk and white chocolate, with crispy oat in a creamy centre.