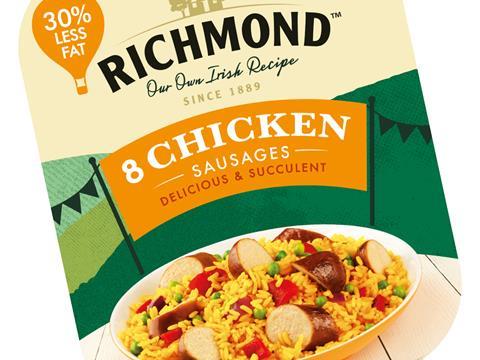 Irish sausage brand Richmond has launched a chicken option in a bid to appeal to health-­conscious consumers.

Containing 52% chicken, with a beef collagen casing, they contain 30% less fat than Richmond’s thick pork sausages, at 10.3g of fat per 100g compared with 16g. They also contain 30% less salt, 20% fewer calories and are higher in protein than their pork alternatives.

Richmond said it was “quietly optimistic” about the potential for the NPD, which promised to deliver “same delicious taste” of its pork sausages.

“We looked into NPD in this space in 2015, but the timing wasn’t quite right for our family audience,” said Spencer. “However, families of today are increasingly interested in leaner, healthier proteins, so it’s no surprise the chicken sausages market is becoming a highly lucrative one.”