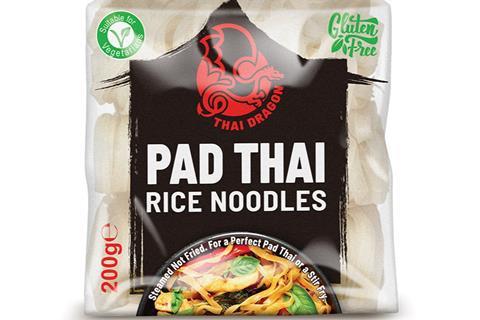 The noodles are billed as being ‘made using traditional Thai methods’

The brand, which Surya Foods launched in 2020 after ploughing millions into a new production facility, has created a duo of gluten-free noodles designed specifically for Thai cooking.

The noodles – Pad Thai and Thin Rice – were “made using traditional Thai methods, steamed and not fried, for an authentic Thai taste experience”, said the brand, and were priced “competitively” at £1.20/200g. They will roll into Tesco this week.

They came as Thai Dragon, which debuted with a duo of bagged snacks but has since expanded into sauces, had already racked up £4.5m in just nine months on the market, according to Surya Foods.

“At the moment the buzzword in pricing at national retail is all about EDLP (everyday low price) – especially as UK families affected by the current pandemic start to feel the squeeze on their finances,” said MD Harry Dulai. “People are looking for ways to maintain quality but at a better price and supermarkets are keen to fulfil this demand.”

The launch of its noodles will be backed by a “contemporary consumer-facing website” and a social media campaign centred on the hashtag #ridethedragon, which will include consumer competitions and giveaways.