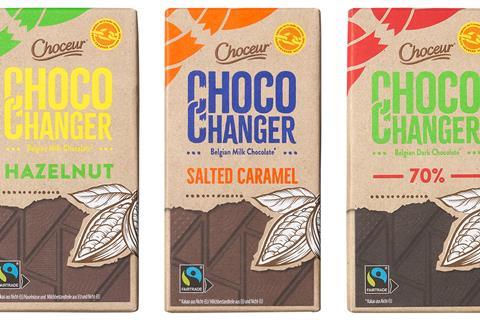 They are made from Fairtrade-certified, responsibly sourced chocolate that meets the brand’s sourcing principles to support cocoa farming communities in Ivory Coast and Ghana and “guaranteeing a transparent and traceable supply chain”.

Those principles are: using 100% traceable cocoa beans, paying a higher price for them, strengthening farmer co-operatives, engaging in long-term direct trading partnerships, and focusing on cocoa quality and productivity to optimise cocoa yields.

Aldi was the first discounter to sign up to Tony’s ‘Open Chain’ initiative in December 2020. Tony’s launched the initiative in 2019 in a bid to boost supply chain transparency and increase co-operation between businesses in the chocolate category.

Tony’s Chocolonely head of impact Paul Schoenmakers said the chocolatier was “proud to welcome Aldi as a new mission ally”.

“Together we take responsibility for the chocolate industry to drive structural change towards a more equally divided cocoa chain.”

The chocolates will be available as a Specialbuy in Aldi stores from 19 September.

Aldi corporate responsibility MD Mary Dunn called the launch a “supermarket first”. “By choosing the Choco Changer, shoppers are getting a delicious chocolate bar while also doing their bit to support hard-working cocoa farmers,” she added.

Aldi isn’t the only big business in the sector to collaborate with Tony’s over recent months. It recently collaborated on an 5.7% abv white chocolate and raspberry milkshake IPA with BrewDog, called Tony’s Hopolonely, for instance.

News of the collaboration with Aldi comes on the back of a controversial year for the ethical chocolatier.

In January, Tony’s claimed a range called ‘Sweet Solution’, whose packaging mimicked several brands from high-profile confectioners, had been dropped by Sainsbury’s prior to launch after pressure from rival suppliers.

Then, in February, it faced criticism when it was revealed it had been dropped from Slave Free Chocolate’s list of ethical chocolate companies for working with Barry Callebaut, which at the time had been named as a defendant in a US court case brought against the cocoa industry by International Rights Advocates on behalf of eight former child workers on plantations in Ivory Coast.

Schoenmakers said by working with big chocolatiers like Barry Callebaut it was “triggering them to change” and such partnerships were necessary to demonstrate that its principles could be scaled up.