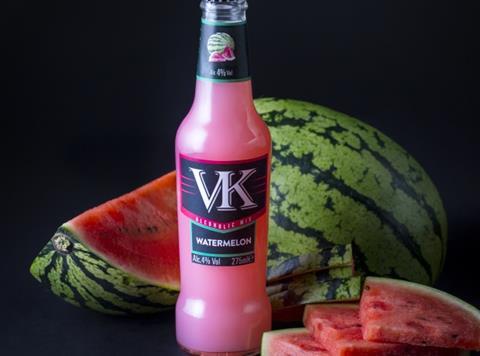 VK has added a new Watermelon flavour to its range of RTDs.

The 4% abv drink was chosen to join the range after a nationwide competition to find a new flavour for the brand, beating the likes of Violet and Wild Fruit in a public vote last month. Watermelon received more than 19,000 votes - total votes topped 33,000.

It will roll out next February in 275ml bottles. Rsp and retail listings are yet to be confirmed.

The brand will be hosting samplings with a ‘consumer engagement tour’ in Deltic Group-owned nightclubs in November.

Watermelon was “set to be a key flavour trend in 2019”, suggested Global Brands head of marketing Jen Draper, adding the NPD would tap the current vogue for pink drinks.

It will bring VK’s range of drinks, which also includes ‘Blue’, ‘Ice’ and Tropical Fruits flavours, to eight.