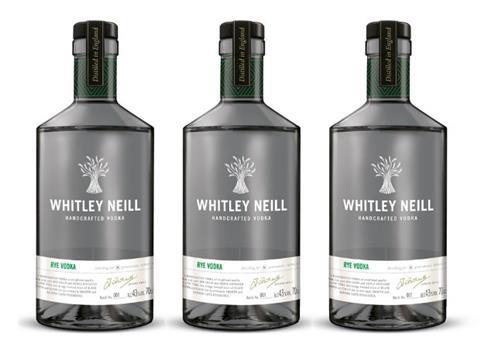 Upmarket spirits brand Whitley Neill has expanded its range with the launch of its first unflavoured vodka.

The premium vodka was made with winter rye and triple distilled in copper stills, giving it a “clean aroma”, with “subtle hints of black pepper, vanilla and liquorice”, Halewood said.

While the rest of the Whitley Neill range features a strapline detailing the country the flavours are ‘Inspired by…’, this newest addition highlights its local provenance with a ‘Distilled in England’ claim.

“While gin might be their main spirit of choice, our data shows many of them will also drink vodka on occasion, making this the perfect complement to the brand’s award-winning portfolio,” he added.

It comes after the gin brand introduced its first venture into vodka, a blood orange flavoured SKU, in late 2016.

Halewood has focused on championing its range of high-end spirits in recent years, most recently revamping the look of trendy Cornish rum brand Dead Man’s Fingers earlier this month and securing a distribution deal with The Glasgow Distillery Co in March.