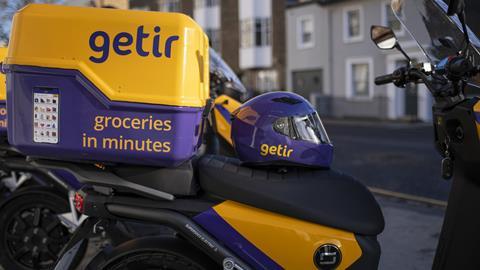 Rapid delivery: where is the fast-moving sector going?

A raft of ‘q-commerce’ players have quickly established themselves. As the market matures, will they prosper or find themselves snapped up?

The dark store rapid grocery market is still so new, it’s yet to decide on a name. Some of the players – the likes of Getir, Gorillas, Dija, Jiffy, Weezy, Asap, Zapp and Fancy – say they are in quick commerce (or q-commerce). Others are in the instant needs category, or immediacy, or on-demand convenience grocery.

Despite the youth of the category, the market is quickly maturing, with some early indicators of sweeping consolidation.

M&A is already underway. In May, Fancy was acquired by US rapid player Gopuff. And after securing $1bn in funding last month, Gopuff has since snapped up Dija – which after launching in January by March had acquired Cambridge-based 15-minute snack delivery startup Genie.

Is further consolidation coming? What are the advantages of scale? How long will the courier apps and supermarkets stay passive spectators? And what does the future look like?

According to Jefferies equity analyst Giles Thorne, consolidation is highly likely, given the potential of the model.

Convenience grocery – unlike big basket grocery or weekend takeaways – is not well served online, he says. “And when you’ve got very low levels of digitalisation and a business model that cracks the code, then it creates a gold rush.”

Investment cash has flooded into the market with the European rapid grocery sector already raising around $1.5bn. Gopuff is valued at $15bn, Getir $7.5bn, and Gorillas is seeking funding to value it at $6bn.

“This business model makes money hand over fist,” Thorne says, pointing to analysis that a single dark store offers return on invested capital of 40%-60%. “There is gold at the end of that rainbow.”

Acquiring can be more straightforward than starting from scratch in new areas. Indeed, Gopuff’s acquisitions of Fancy and Dija were driven, the company said, by a desire for “physical infrastructure and footprint” in Europe.

“In a similar way that delivery intermediaries have consolidated over recent years, it is inevitable,” says Florence Wright, senior retail insight analyst at Edge by Ascential. “With rising demand and competition for suitable spaces, acquisitions can be a route to acquiring more warehouse space to scale services.”

Although a single dark store can only serve little more than a postcode or two, there are advantages of scale for operators. “Scale benefits come from bulk buying discounts from suppliers, and you’re bound to get efficiency around marketing,” Thorne says.

The ease of replication of the model means there could well be more players before there are fewer. “More capital will pour into Europe, more operators will pop up and more cities will get covered,” says Thorne.

Whether supermarkets or food courier firms or indeed an e-commerce giant like Amazon make moves into the market remains to be seen.

“More capital will pour into Europe, more operators will pop up and more cities will get covered”

“Having new players entering the market creates a very fragmented on-demand grocery delivery space,” says Wright. “For existing retailers, these entrants are potential competitors for market share. Acquisitions or investments could be a route for retailers to build out their own on-demand delivery services, keep up with consumer trends and eliminate potential competition.”

A possible sign of things to come is Carrefour group’s move last month to take a minority stake in 15-minute grocery startup Cajoo.

In the UK at least, supermarket relationships with courier apps like Deliveroo and Uber Eats suggest they would rather partner with established brands on rapid delivery, while their own offerings take a backseat.

“It’s likely we will see local partnerships and tie-ups with established grocers, who don’t have the ability to build their own propositions,” says Julian Skelly, retail lead at Publicis Sapient.

Deliveroo could “very easily sidestep a roll-up” of pureplay dark stores and establish its own, offering the service to supermarkets with which it has already formed relationships, says Thorne.

For the supermarkets, the model comes “at a fraction of the operating cost of, say, a Sainsbury’s Local” he adds.

Indeed, Deliveroo CEO Will Shu recently said “elements of the dark store model make a lot of sense”. Thorne says: “I find it hard to believe Deliveroo will be passive.”

Amazon, however, “is in a different position” says Miya Knights, co-author of a book on the online giant. “It won’t do anything to dilute its main same or next-day model,” she says. “It has also already invested heavily in its one to two-hour Fresh delivery offer when it comes to grocery, using a hybrid, centralised DC and Morrisons in-store picking approach.”

Amazon does of course, have a minority stake in Deliveroo, and has reported taken an interest in Germany’s Flink.

What rapid delivery players around the world are up to

Gopuff: Acquired Fancy in May and Dija earlier this month to give it “immediate presence in France and Spain and providing further densification in the UK”.

Getir: Made its first acquisition last month of Blok, a startup formed in February, giving it “immediate access” into Spain and Italy, with Portugal to follow soon.

DoorDash: The US platform partners with convenience retailers but last year launched its own dark stores. It is reportedly in talks to take a stake in with Gorillas, its first investment in Europe.

Flink: The German rapid delivery player is, according to Bloomberg sources, assessing buyout bids from both Gopuff and Amazon.

Rappi: The Colombian delivery company plans to have 100 dark stores across Latin America by the end of 2021, but many, like Ladd, predict it will buy its way into Europe.

Whatever happens, the market will remain dynamic. Some areas of course – London among them – are saturated with rapid players.

“It feels like there a too many new entrants, with little real differentiation in their offerings,” says Skelly. “When the music stops on the current phase of introductory promotions, there likely won’t be enough chairs for everyone.”

The various players are not yet competing for turf. When this happens, “they will look for a way to achieve a competitive advantage either on price or on assortment” says former Amazon executive Brittain Ladd.

The deal-making between immediacy brands has only just begun. In the longer term, the market is akin to a “Mexican stand-off” says Thorne.

The stand-off could be long, and costly, with “PE capital able and willing to write big cheques to be last man standing”, he adds. “The biggest person in the playground wins.”