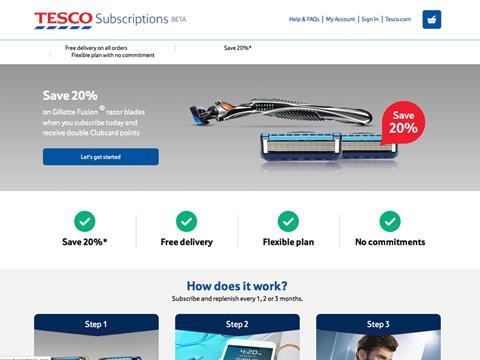 Tesco has pulled the plug on tescosubscriptions.com, which allowed shoppers to buy Gillette razor blades on a subscription basis.

The trial site, launched in October, offered a year’s supply of Gillette Fusion ProGlide razor blades for as little as £3.33 per month (depending on typical usage) after an initial £10 payment.

At the time of the launch, the company operating the trial – Indigo Lighthouse – said it expected to offer other non-food items on a subscription basis to Tesco shoppers in due course.

Instead, Tesco has now ended the trial. In a message on the Tesco Subscriptions site, the retailer said: “We are sorry to be ending this service, but don’t forget that you can still find your Gillette Fusion ProGlide razor blades at Tesco stores and online.”

“If you already have a Gillette Fusion ProGlide razor blades subscription with us, we will be contacting you with more details about what this means for you.”

A Tesco spokesman added: “Our subscription service trial has now ended and we’d like to thank all the customers who took part. We’ll continue to offer customers a great online service through our grocery home shopping site.”

Razor subscriptions are a booming market in the US, where the likes of Dollar Shave Club have been putting razor sales from traditional retailers and suppliers under growing pressure with cut-price offers and discounts. Gillette owner P&G has launched its own subscription service in response, called Gillette Shave Club.

In the UK, P&G offers Gillette subscriptions through Amazon’s subscribe & save service, while King of Shaves runs a razor subscription service at shave.com. A growing number of start-ups – such as Sterling Shave Club and Bearded Colonel – also compete in this area.