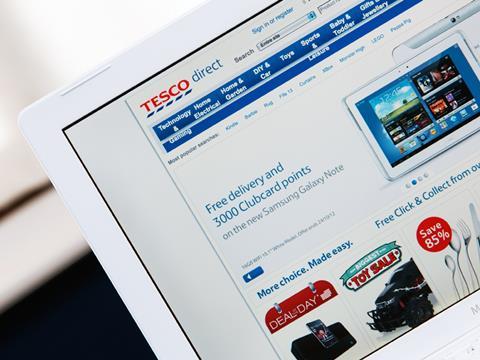 Compared against Amazon, the Tesco Direct site was confusing and full of friction

One of the fundamental reasons for Amazon’s success is its unwavering commitment to a vision laid out two decades ago: to relentlessly innovate in a bid to create long-term value for customers. Amazon’s USP is disruption and it continues to finetune it. Every action is guided by a vision that hasn’t changed since Amazon’s inception.

Most publicly traded retailers aren’t afforded the luxury of such long-term thinking, and turnover at the top often brings a change in strategic direction. However, retailers can compete with Amazon by honing in on their own strengths and streamlining anything that does not add value to their core proposition. In this climate, it’s differentiate or die. Being ‘all things to all people’ is no longer an option.

The closure of Tesco Direct is an admission of defeat to Amazon: it was after all designed to compete with the behemoth head on by replicating its marketplace format, extending Tesco’s product range beyond the confines of superstores. But if there is one rule in retail today, it’s this: you cannot out-Amazon Amazon.

Aside from racking up Clubcard points on big-ticket purchases, there was very little incentive for shoppers to choose Tesco Direct over Amazon. Tesco’s site in comparison was confusing and full of friction. Pricing was inconsistent, it lacked product recommendations and reviews, and the range was neither broad nor compelling enough to make it the go-to destination for general merchandise.

Let’s not forget that many shoppers today begin their product search not with Google but with Amazon. Amazon has become the first port of call for even the most obscure products – from silicone wine glasses to cat scratch turntables – which when combined with Prime delivery becomes a very compelling proposition.

Tesco Direct was loss-making and contributed very little to the topline, which sparks a lesson to be learned from Amazon: admitting failure and swiftly moving on. Offering 94 types of treadmills online won’t help Tesco retain its title as the country’s largest food retailer. There’s no time for costly distractions when Amazon is on your doorstep. Tesco will be far better off to merge grocery and non-food onto one platform, as some competitors did several years ago, and then focus on logical category extensions to mirror what shoppers would find in-store.

There is a renewed sense of urgency to strengthen these core non-food categories and it actually has nothing to do with Amazon. A combined Asda-Sainsburys-Argos will create a retailing powerhouse in toys, baby, clothing and home. Tesco needs to up its game fast in these categories and leave everything else to the specialists.

The Direct business joins a growing graveyard of Tesco brands including Giraffe, Euphorium, Harris + Hoole, Nutricentre, Hudl, Blinkbox, Dobbies. What was once considered business-critical diversification is now seen as a pricey distraction. Tesco Direct won’t be the last of Dave Lewis’ and Charles Wilson’s strategic cull as they continue to tighten Tesco’s focus on food by offloading non-core assets. There is, after all, only room for one everything store.