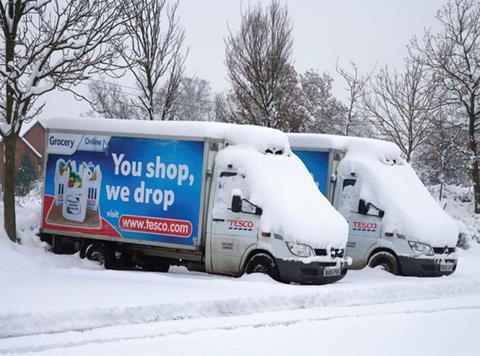 The eyes of the world will be upon supermarkets in the days to come as they seek to avoid the repellent scenes of customers brawling over bargains in the Black Friday sales, whilst nevertheless cashing in on the big day and its online equivalent, Cyber Monday.

But for the UK’s biggest retailer, Tesco, not a single flatscreen TV had been thrown in anger before its non-food online offering buckled under the strain, as The Grocer revealed 10 days ago.

In fact, Black Friday was still two weeks off and Christmas more than six weeks away when Tesco was forced to apologise for huge delays hitting its Tesco Direct deliveries and click & collect services.

With the situation still unresolved today, Tesco is blaming the “unexpectedly high demand” caused by the popularity of its ongoing Clubcard Boost promotion, which allows consumers to cash in on Clubcard vouchers with £10 up for grabs for every £5 voucher.

Sources say the rush has been even greater this year because Tesco extended the promotion to include gaming and electronic items, including laptops, TVs and iPads. Whilst at least this may have avoided scenes of bloodshed in the aisles with customers fighting each other for the last copy of Fallout 4, what does it says about the state of affairs at a retailer that has prided itself on its leadership in the online battleground? Tesco has warned customers that they will have to wait up to seven days for their orders to arrive at home, or to collect in store.

On the surface at least, it looks like Tesco’s performance has got far worse since this time last year when it previously ran into bother on the back of the Black Friday surge.

At the time, it introduced a temporary halt to its ‘next day’ service and issued a warning to customers that it would take nearly three days until they could collect their orders.

For a company that has staked so much on improving customer service, for that delay to be more than doubled, even before the real madness kicks off, begs more than a few questions.

This is where opinions, much like the appeal of Black Friday, fall into two distinct schools of thought.

The least kind of them is that Tesco is floundering with an online service that some within the organisation see as an expensive diversion from its core business. If it can’t cope with demand from a promotion like Clubcard Boost, then surely Amazon’s Christmases have all come at once - and much quicker than a Tesco delivery at that.

A kinder perspective is that this could be another case of Tesco reining in some of its more extravagant ventures in a bid to concentrate on the number one requirement of selling vast volumes of food and drink to its customers.

Has Dave Lewis come to the conclusion that it is not worth prejudicing what is a crucial festive season in its core territory in order to meet demand in a non-food online space where profits have proved hard to come by?

If that is the case, then much as some customers may baulk at the thought of waiting a week for their new laptop, it could still be constituted as strategically the right thing to do, rather than simply a shambles.

And Tesco temporarily reining in the quality of its non-food service doesn’t necessarily mean the same goes for its online food & drinks offer. In fact, only this month The Grocer revealed Tesco had launched same day click & collect services for grocery products across 200 stores for all orders above £40.

While service on the shop floor has become Lewis’s mantra, making digital pay in a way that no traditional supermarket including Tesco has really got to grips with so far, could yet turn out to be equally as important .

As a massive festive trading period approaches for Tesco, one of the keys to success will be his ability to pick the right battles to fight.