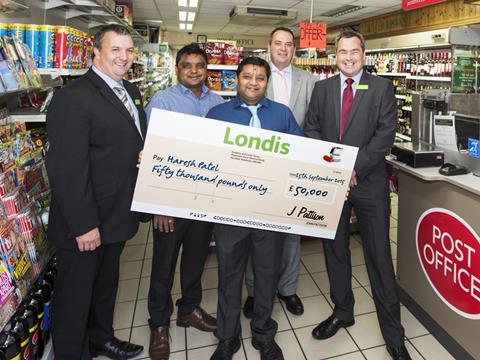 Londis has announced the winner of its Bring a Friend competition and the new independent retailer joining the symbol.

Ben has won a luxury holiday worth up to £10,000 or the prize in cash for nominating the winning retailers, who have been offered a £50,000 store development fund.

“We were really excited to win the competition and thanks to Ben for nominating us,” said Haresh Patel.

“We are now planning our store development and really looking forward to beginning the refit.”

Ashish and Haresh own an unaffiliated convenience store in Margate, Kent, which they have been running for five years. The store is located within a large retired population and regularly supports community projects and initiatives for the local residents.

“I’d like to extend my congratulations to Ashish and Haresh on becoming our newest Londis recruits and to thank Ben Patel for bringing them to the Londis family,” said Londis brand director John Pattison.

“We’re serious about supporting current and future Londis retailers to grow their businesses locally, which is why this kind of investment in store development is important to us. The Bring a Friend campaign has been a great success, by engaging current retailers in our recruitment plans we have created some fantastic ambassadors for the Londis brand.”