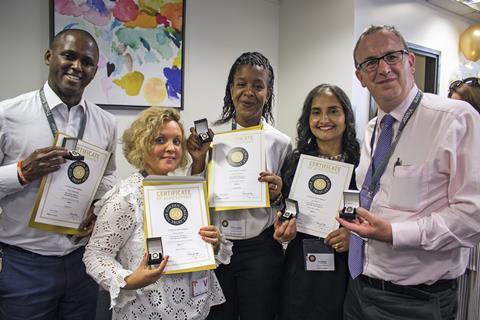 John Lewis Partnership is sending staff on a secondment to food waste charity FareShare as it celebrates 20 years of its volunteer programme, the Golden Jubilee Trust.

The partnership has chosen FareShare, along with sight loss charity SeeAbility, to work with during 2020 as part of its celebrations.

Around 20 staff from all areas of the partnership will be seconded for up to six months to FareShare and SeeAbility, to help the charities grow.

Staff will work to help improve day-to-day operations to address food poverty at FareShare. This builds on the support from John Lewis and Waitrose over Christmas, which gave more than 1,500 people across the country the opportunity to enjoy a community a festive dinner.

In 20 years, the Golden Jubilee Trust has helped more than 900 national and local charities across the UK by placing staff on secondments at a charity of their choice for up to six months while still on full pay and benefits.

More than 980 staff have participated during that time, equating to more than 393,000 hours donated and representing a community value of more than £25m.

“Today’s announcement is an exciting milestone for the Golden Jubilee Trust,” said Golden Jubilee Trust manager Liz Hogan. “Not only are we proud to have supported over 900 charities during our 20 years, but we’re delighted to honour this anniversary year by offering so many more partner secondments to two important charities so that we can make a greater difference and help develop their vital work at a faster pace.

“These extra secondments also mean that by the end of the year over 1,000 partners would have participated in the Golden Jubilee Trust since it was established.”

FareShare CEO Lindsay Boswell said: “When the power of big business turns its attention to delivering major social change then great things can happen. This is why FareShare are thrilled to be supported by the John Lewis Partnership as the expertise and focus of their partners will allow us, as a national charity, to expand our impact right across the UK.”

The Golden Jubilee Trust was set up in 2000 to honour the 50th anniversary signing of the partnership’s Second Trust Settlement, when founder John Spedan Lewis transferred remaining shares and ultimate ownership into a trust for the benefit of its employees, known as partners.