What the food sector needs to know about employing prison leavers 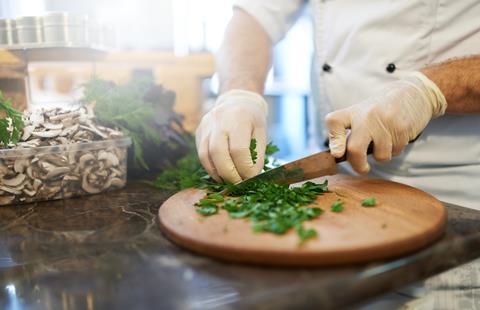 Prisons often teach industry-level skills leading to qualifications, such as in food safety and preparation

In a bid to address the ongoing labour shortage and prevent empty shelves this Christmas, more food producers and suppliers are exploring the idea of hiring people with a prison background. In fact, the Association of Independent Meat Suppliers recently asked the government to allow the meat sector to hire people currently in prison to resolve chronic staff shortages.

But even in the current climate, many prison leavers find it difficult to find a job. While several well-known companies actively recruit prison leavers – including Timpson, Greggs and Bernard Matthews – almost half of employers say they would not employ someone who has been to prison and just 1% have initiatives in place to recruit them.

That’s despite evidence from retailers such as Marks & Spencer showing that people with a prison background often make excellent employees.

I work for Nacro, a charity that supports people in and coming out of prison. We know the value that people who have been in prison place on work – it helps them get back on their feet and gives them a fresh start. Employers that actively recruit prison leavers can both address their staffing gaps and help to prevent people from returning to crime. Here’s what you need to know about hiring people with a prison background:

1. They are committed employees. People with a prison history are often committed and loyal employees. The biggest concern of employers about hiring prison leavers is a worry that they may not be trustworthy. However, over 80% of employers of people who’ve been in prison have positively rated their reliability, motivation, attendance and performance. Evidence from employers such as Marks & Spencer shows that someone who’s been in prison places a higher value on having a job because of a desire to stay out of prison. This often means that as employees, prison leavers have high levels of loyalty and retention, which keeps institutional knowledge and your investment in skills within your business.

2. Prison leavers are ready to work. Prisons often teach industry-level skills leading to qualifications, such as in food safety and preparation. The government recently announced the expansion of a kitchen training scheme across England and Wales to enable prisoners to train in prison kitchens while gaining professional qualifications. Some businesses such as frozen food giant Bernard Matthews run workshops in prison that are tailored to their needs, so prison leavers are job-ready on release. Employers can tap into this talent pool to resolve labour gaps and help people get their lives back on track.

3. Employing prison leavers enhances the reputation of your business. Public opinion supports the employment of former prisoners. Over 80% of people think that businesses employing prison leavers are making a positive contribution to society. And 92% of employers say diverse recruitment has enhanced their reputation, helping them win new contracts.

4. Employment is key to reducing reoffending. Reoffending costs the UK an estimated £18bn a year. Numerous studies show that employment is the single most important factor in reducing reoffending, yet only 17% of prison leavers are in full-time work a year after release. Having an income, a sense of purpose and daily routine can help ensure that people who have committed crimes in the past avoid doing so in future, which benefits not only the individual and their families, but society as a whole.

What the food sector can do

Many people are unable to get past the application stage of a recruitment process simply because they have to tick ‘yes’ to the question about convictions. Yet most sectors have no statutory requirement for disclosure of criminal records.

That’s why the Ban the Box campaign is calling on employers to drop disclosure on application forms and instead asking about the convictions later in the recruitment process. By doing this, employers can consider candidates on merit and because applicants won’t be put off applying, they can recruit from the widest pool of talent.

So far more than 150 employers have signed up to Ban the Box, and it would be great if more food businesses got on board.

The New Futures Network is a part of the prison service that brokers partnerships between prisons and employers. It will you help you to identify the best option for your organisation.