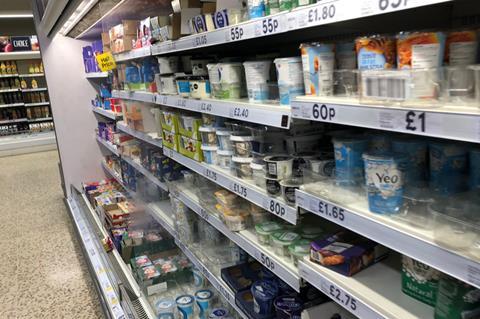 Tesco has committed to removing one billion pieces of plastic from products in its UK stores by the end of 2020.

The move follows meetings Tesco held with suppliers in August, in which it announced plans for a crackdown on a raft of plastics.

Under its ‘four Rs’ strategy - Remove, Reduce, Reuse & Recycle - it said it would remove small plastic bags such as those used to pack loose fruit, vegetables and bakery items, and replace them with paper ones.

It will also ditch plastic trays from ready meals, secondary lids on products such as cream, yoghurts and cereals, sporks and straws from snack pots and drinks cartons and 200 million pieces of plastic used to pack clothing and greetings cards

“Our work to Remove, Reduce, Reuse & Recycle is already transforming our packaging,” said Tesco CEO Dave Lewis. “Over the next 12 months, we will remove one billion pieces of plastic, further reducing the environmental impact of the products we sell. By focusing on solutions that we can apply across all our UK stores and supply chain, we can make a significant difference and achieve real scale in our efforts to tackle plastic.”

Dave Lewis: the grocery sector must end the unsustainable art of packaging air

The move is the latest in a string of major steps by supermarkets to cut down on plastic. Last week Asda urged its suppliers to “take a step into the unknown” and speed up their reduction of plastic, after bringing forward its own landmark target by five years.

Tesco’s pledge has been welcomed by environmental groups.

“Tesco is absolutely doing the right thing in looking to reduce the number of pieces of plastic packaging it produces,” said Louise Edge, head of Greenpeace UK’s ocean plastics campaign.

“When supermarkets focus solely on reducing their packaging by weight, this can trigger a policy of light-weighting - meaning packaging gets thinner or smaller, but still exists as a throwaway item that can pollute our waterways and harm marine wildlife.

“Last year Tesco produced more than 18 billion pieces of plastic, so they’ve still got plenty of work to do, but this is a good start and we hope to see further reductions when it introduces its reusable packaging scheme for online orders in the New Year.”

WWF UK sustainable materials specialist Paula Chin added: “Plastic pollution is the most visible symptom of the environmental crisis we’re currently facing. Businesses, governments and households have all got an important part to play, so it’s good to see Tesco’s commitment to significantly reduce the amount of plastic we use.”