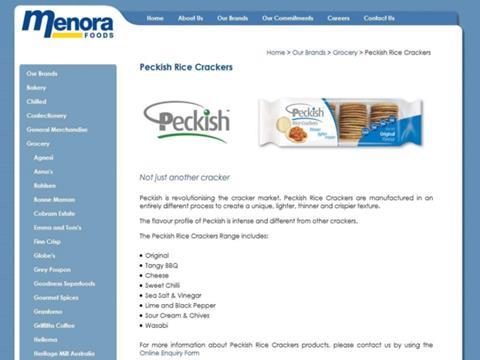 Premier Foods is set to bring Australian rice cracker brand Peckish to the UK this summer.

The Mr Kipling owner said the distribution deal with Australian supplier Menora Foods was at “an early stage” but confirmed it may launch the range later this year.

Peckish comprises eight SKUs in Australia - original, tangy BBQ, cheese, sweet chilli, sea salt & vinegar, lime and black pepper and sour cream & chives - but Premier has not said which would launch in the UK. Menora described the Peckish crackers as “revolutionising the cracker market” and said its manufacturing process created a “unique, lighter, thinner and crispier texture”. The brand is also sold in New Zealand - where it has been expanded with the Rice Snackers range - and Menora is eyeing other markets, including the US and South Africa.

The Melbourne company is one of Australia’s biggest privately owned bakery, chilled and grocery distributors, and represents brands including Bahlsen, Bonne Maman and Chobani.

News of the deal comes six weeks after Premier secured a “transformative” £1.1bn refinance deal that it said would enable it to launch a “strong programme of NPD” in the second half of the year. The company also received a £28m cash injection from the sale of Hovis in January.

Demand for healthier-style snacks and sharing have driven the savoury biscuit category, with Kantar Worldpanel reporting sales of savoury biscuits up 8.7% in volume year on year [12w/e 30 March 2014].