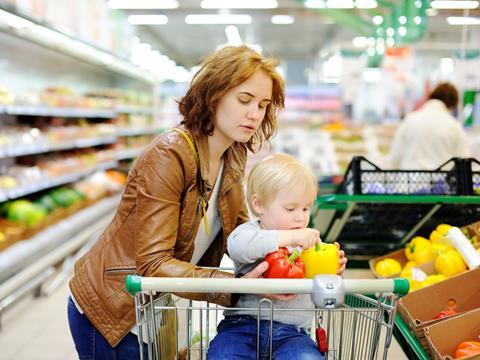 Retailers have been urged to go “much further” to reduce the price of healthy food after new research claimed millions of families were struggling to meet the costs of the government’s recommended diet.

A study by the Food Foundation today claimed the families of nearly four million children in the UK were households struggling to afford the recommended amount of fruit & veg, fish and other healthy foods included in PHE’s Eatwell Guide.

Researchers found the poorest half of households in the UK would have to spend almost 30% of their disposable money, after housing costs were taken into account, on food to meet the recommendations of the guide, compared to just 12% for the richest half.

The study estimated a household of four (two adults and two children aged 10 and 15) would have to fork out £103.17 per week to be able to follow the Eatwell Guide.

It claimed 47% of all UK households with children did not spend enough to meet the target, a proportion which rose to 60% for single-parent families. Just 20% of households where the main earner is unemployed spends the recommended amount, it estimated.

“Retailers need to go much further in making sure the more healthy products within categories are not more expensive than the less healthy,” Food Foundation executive director Anna Taylor told The Grocer.

“This will really help customers who are on a very tight budget to make healthier choices.

“I hope that the government will look into this issue as a matter of urgency, in order to make eating a healthy diet more affordable.”

The move comes with the Department of Health due to launch a consultation this month on its proposals for a crackdown on the promotion of unhealthy food in supermarkets, which will also try to skew promotions towards healthier products.

The government has said it wants to make the promotion of healthy food using mechanics such as bogofs the “default option” for retailers.

Taylor added: “It cannot be right that 50% of households in the UK currently have insufficient food budgets to meet the government’s recommended Eatwell Guide. A healthy diet, which we know is important for our health and development, should not be unaffordable to so many people.”