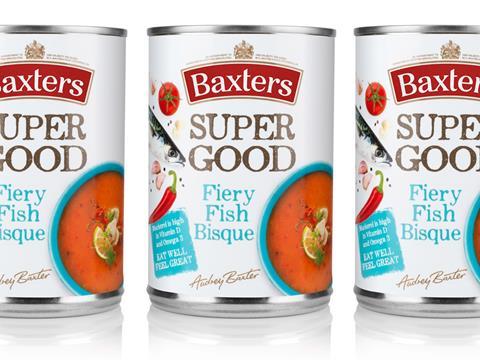 Why: Tinned soup was among the products under scrutiny last week, when a BMJ study investigated the possibility of a direct link between ‘ultra-processed’ food and cancer. Nevertheless, Baxters is confident its six-strong Super Good range is a healthy choice by way of its “selection of proven health-boosting ingredients” such as turmeric and oily fish. The premium lineup launched in September as the ambient soup category was down 3.8% in value sales to £321.4m on volumes down 7.7% [Nielsen 52 w/e 9 September 2017].

Consumer verdict: Pre-trial interest was low among our shoppers, and more than three quarters decided it was not for them. The soup scored below the norm in all categories, with flavour, odour and texture disappointing. Consumers were critical of the “strong fish smell”, “weird taste” and “unpleasant aftertaste”. Nevertheless, some said they would use it when entertaining and as a standby. They deemed the soup “healthy” and liked that it smelled “like the sea”.